The mid season finale of Supernatural “Lotus” aired Thursday, December 8 and was a game changer that found Lucifer inhabiting the body of the President.  And by the episode’s conclusion, Sam and Dean (Jared Padalecki, Jensen Ackles) found themselves in quite a jam.

This article contains spoilers so if you haven’t seen the episode “Lotus” please do not continue reading.

Onward and Upward. The Prince of Darkness enjoyed the fame of possessing rocker Vince Vincente that he decided that all his future vessels be men of power, such as captains of industry.  But why settle for the head of a company when you can have the head of a country? Forget an election, Lucifer ELECTS himself as President of the United States when he possesses the body of Jefferson Rooney (David Chisum).  And what’s a President without a First Lady? The President’s wife Louise is dead, but Lucifer/President Jeff is having a dalliance with Kelly Kline (Courtney Ford) resulting in a pregnancy. Yes, an angel and a human are having a baby, a Nephilim is on the way!  The last Nephilim seen on Supernatural was in Season 9 so it will be interesting to see what role the birth of this baby will play. 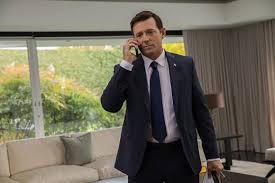 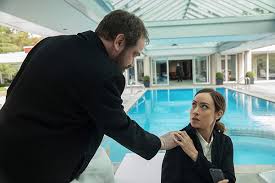 The Gangs All Here.  How many FBI Agents does it take to investigate a murder? That would be the question I’d ask if I were the local law enforcement.  In addition to the fact that most of the murders the “agents” say they are called on don’t really qualify as federal cases, in “Lotus” Sam and Dean were joined by Castiel and Crowley (Misha Collins, Mark Sheppard).  Hunters with an angel and a demon as backup is something that is rare in the hunting community.  But Sam and Dean are rare men and hunters who have themselves been to Heaven, Hell, demons and possessed by an angel (Sam).  What an impressive resume! 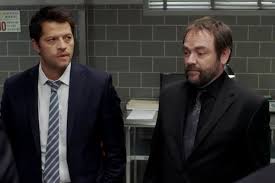 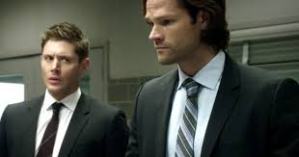 And The Queen Mother of Hell Joins The Team.  Poor Rowena (Ruth Connell), she wants love.  But apparently, she looked for it in all the wrong places.  What’s a witch to do when learning her current boyfriend is a two timing lout?  Join your son, The King of Hell and his buddies Feathers (Castiel), Squirrel (Dean) and Moose (Sam)- sounds like a nature outing doesn’t it?- on a mission to capture Lucifer. When you have an angel and a demon on your team, adding a witch increases your firepower. 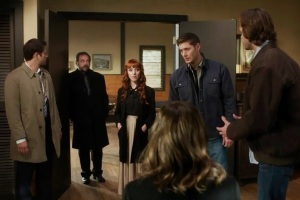 What’s the Catch, Mr. Ketch?  The British Men of Letters have some nifty gadgets like a grenade launcher and a Golden Egg that can extract Lucifer from a vessel. Why wouldn’t Sam and Dean want to work with them? Torture aside (not the best move Lady Toni as afflicting pain doesn’t exactly scream “Let’s be a Team”), there still appears to be something shady about them. Mr. Ketch may dress well and have a great British accent but class doesn’t always translate into being trustworthy.  He did save Sam and Dean’s bacon though. 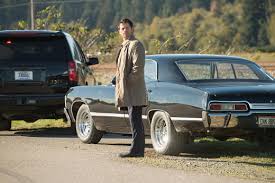 Dancing to the Jailhouse Rock.  Okay, you’re in the room with the President of The United States where you just freed his body of Lucifer and the President is unconscious on the floor, what do you do? 1) Use the angel on your team to zap you out of the room pronto before you’re discovered or 2) Tell the angel to take the woman carrying Lucifer’s baby out of there while you stay and wait to be caught? Although in all fairness, Sam and Dean weren’t waiting to be caught or planning on being arrested for the attempted murder of the President, they should have left when Castiel did. Or left Castiel to check that Lucifer was gone and taken Kelly to safety. Now, the Winchesters are on their way to prison. And not a Green River County Detention Center with Dean playing poker for smokes or with someone like Deacon to spring them. But scary Federal Prison! Forget classic rock, our boys will be singing the jailhouse blues! 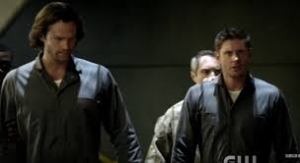 The promo for Supernatural Season 12, Episode 9 “First Blood” returning at the new time of 8/7c shows Sam and Dean in separate cells.  They have been in jail for six weeks as Castiel tells Mary (Samantha Smith). One of my questions is, why hasn’t Castiel, an angel, gotten them out?  Can’t he zap into the cells and wipe the memories of the guards and all those involved? Or is he planning on (with Mary’s help) going old-school with an honest to goodness prison break?  It will be interesting to see how this all plays out.

Comments/ Sound off below.  Or tweet @thenerdygirlexp and @stacyamiller85 .