This article contains spoilers so if you haven’t seen the episode “The Raid” please do not continue reading.

Once upon a time there were two hunting brothers named Sam and Dean Winchester who learned all about vampires, The Colt and Dead Man’s blood from their father, John. “Vampire…it gets funnier every time I hear it,” the elder brother Dean said, amused (“Dead Man’s Blood”). Of course, vampires became less funny when Dean himself was turned into one.  Fortunately, “an old Campbell family recipe” cured Dean of his vampire affliction (“Live Free or Twi Hard”). Along the way, the Winchesters crossed paths with the Alpha Vamp, the first of his species (Rick Worthy) and later forged an unholy alliance with the creature in an “enemy of my enemy is my friend” sorta deal (the Alpha Vamp gave the Winchesters some of his blood to use for their weapon to defeat the Season 7 big bad, the Leviathans). Ever since the end of Season 7, the Alpha Vamp has been MIA. Until now.

In tonight’s episode The Raid, the Alpha Vamp is back.

As the episode opens, the boys are still reeling from the news that Mary (Samantha Smith) has been secretly working with the British Men of Letters (BMOL).  Sam and Dean are very angry that their mother chose the BMOL over them. The pain is etched on their faces: To Dean, Mary is no longer Mom. He throws her out of the bunker. How can they get pass this when Mary’s betrayal is like Everest between them? Later, Dean tells Sam (who is more of the peacemaker in the situation) that he needs to choose a side. So while Dean goes out for a drink (or two), Sam finally responds to Mary’s texts and meets with her. Mary tells Sam that the BMOL have a better way of ridding the world of monsters; her selling point(she feels) is that the BMOL’s “better plan” will finally give Sam and Dean the chance of living a normal life. Consequently, she takes Sam into the BMOL’s compound. Sam is still skeptical but he listens to the pitch that Mick delivers. Meanwhile, Mr. Ketch (with a peace offering of fine scotch) goes to the bunker to talk with Dean. Mr. Ketch feels that Dean shares his murderous appetite and will want in on killing the vampires in the nest the BMOL has been tracking. Even though Dean doesn’t trust Mr. Ketch, killing a vampire nest does have appeal so it’s off to the vampire nest for Dean and Mr. Ketch. 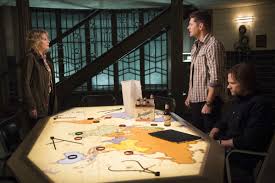 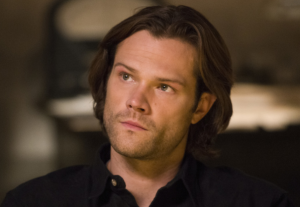 The bulk of this episode is devoted to the vampires overtaking the BMOL compound. During these intense, action packed sequences, we see how thoroughly unprepared Mick and his team are for practical maneuvers against the vampires. It is Sam who must shepherd this combat operation, with Mary to assist him. 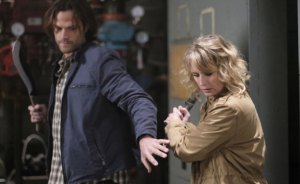 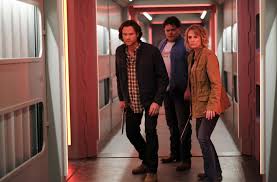 This pragmatic, take charge Sam Winchester is who I enjoy seeing. In too many past episodes, Sam was portrayed almost like the “damsel in distress” where he was choked, tied up or knocked unconscious; he was the baby brother who needed rescuing from his big brother. In my opinion, this kind of portrayal was unfortunate for Sam’s character. I would have liked to see Sam and Dean working together. 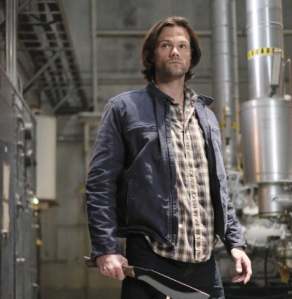 Jared Padalecki delivered a strong performance. The seminal moment for me was when Sam learned that Mary had stolen The Colt from Ramiel and had given it to the BMOL. The emotions at uncovering yet another piece of Mary’s betrayal were on Sam’s face. Still, he had the wherewithal to strategize to get them all out of their predicament. Sam knew that they needed Bobby’s knowledge in making bullets for The Colt (nice shout to Bobby in this episode) so he put the team at work at this task while he and Mary kept the vampire siege at bay as best they could.

The heart pounding event was when the Alpha Vamp appeared and the group learned that a hunter who they thought was on their team was actually a mole feeding intel to the Alpha Vamp. The Alpha Vamp reminded Sam that he was one of the five things that The Colt can’t kill. Sam called the Alpha Vamp’s bluff and fired the fatal shot, killing the Alpha Vamp.

In the end, it seems as if Sam will be working with the BMOL along with his mother. The implication that Sam gives the BMOL is that he will get Dean to eventually follow their lead as well. In addition, Dean appears to have forgiven Mary’s duplicity. Will the Winchesters now be on the road towards family healing?

The acting, the writing, the direction and the special effects all contributed to an enjoyable hour of television.

When we are very young, we develop this idealistic image of our parents, in particular our mothers.  This loving, nurturing woman becomes the center of our universe and is perfect.  Almost like an angel on Earth. On Supernatural, we know Dean Winchester (Jensen Ackles) hasn’t had much luck with angels; more often than not, he felt betrayed by them. In the episode “The Raid,” Mary Winchester (Samantha Smith) lost her angelic glow in son Dean’s eyes as he listened to her reasons for working with the British Men of Letters (BMOL), you know those shady English dudes.  How could she side with the people who tortured her sons? Worst yet, how could she lie about it? All the time when Mary told them that she needed space to get used to being back, she was off hunting with the enemy.  This was a bitter pill for Dean to swallow even with an alcoholic chaser.  Mary tried to explain that she was still Sam (Jared Padalecki) and Dean’s mother but not just a mother and they were no longer children. “I was never a child,” replied Dean, almost blaming her for leaving him even though she had not chose getting killed by Azazel.  Dean loves his family with his whole heart.  He puts them on pedestals and when they disappoint him, it’s an anger and pain he expresses by wanting nothing to do with them.  Sam has been on the receiving end several times i.e. using his powers and working with Ruby, drinking demon blood and not looking for Dean when he was in Purgatory, so the younger Winchester knows that Dean’s words can cut deeper than Ruby’s knife or an angel blade. And the most hurtful thing Dean could say to his mother was to stop calling her mom and referring to her as Mary.  And asking her to leave the Men of Letters Bunker. Dean was also annoyed with Sam playing peacemaker “Pick a side,” translating into ‘Mary was wrong, agree with me.’ 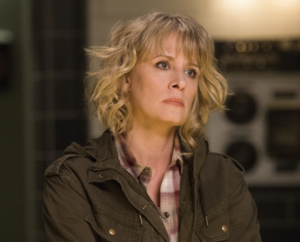 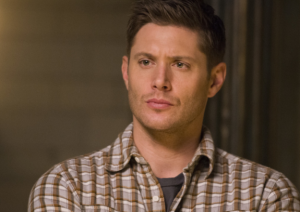 Although still continuing to work with BMOL, Mary tried apologizing to her eldest via text messages. And let me say, I love Mary the hunter. She’s skillful, causing Mr. Ketch to say “We have the Winchester we want.” Sam and Dean who?  But we already know that the BMOL are liars as we see Mr. Ketch trying to ‘woo’ Dean over to their side with words of flattery, if you can call it that: “You and I are the same, we’re killers.” That’s right Mr. Ketch, appeal to Dean’s primal nature of “hunting down evil sons of bitches.” 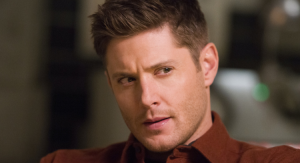 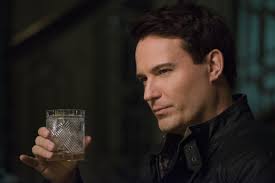 Although I wouldn’t call it picking aside, Sam goes to the temporary base of the BMOl to see his mother.  Mary gives him a tour of the high tech facility and introduces her son to some of the team, including hunter Pierce (Aaron Douglas).  He learns that the BMOL has a lead on the Alpha Vamp (Rick Worthy) and are working on Project V aka kill the vampires.  But things take a turn for the worst when the vampires decide to hunt the hunters.  That’s right, the fang patrol are tired of the Dead Man’s Blood and getting their heads chopped off and they’re not going to take it anymore. Heads will roll..right off human shoulders! To the BMOL cave and step on it! Thus begins the exciting part of the episode that had a “Nightshifter” feel to it. Trapped inside with the supernatural evil after you, where the hunters must rely on their training to survive.  Unfortunately for all their high tech gadgets, we learn that the BMOL have very little hunting skills. If only those trapped with vampires on their asses had a gun that could kill almost everything (except five things).  Oh wait…they do. Sam is shocked to see The Colt.  Where did the BMOL get it? “I stole it from Ramiel,” Mary says. Ouch, pull the band aid right off why don’t you mom?  But no time for that, Sam tells the BMOL that they can use The Colt against the vampires and fortunately, he has the recipe to make magical bullets (thanks Bobby Singer, thanks Supernatural for the shout out).  But the Alpha Vamp gets inside the base and starts killing. We also learn that Pierce is on AV’s payroll. Darn hunters, what happened to loyalty? And why and how do monster seem to have deep pockets to buy off their enemies? In the end, Sam proves he’s one clever hunter and gets them out of the sticky situation.  Love seeing Sam being the one to save the day; it’s been a long time.  And Dean forgives his mother when he learned the vampires were invading.  Some viewers may feel that Dean forgave Mary too quickly but I don’t. When faced with the possibility of losing her for good, whether Mary lied to them didn’t seem that important.  But how will Dean take Sam’s decision to also work with the BMOL. Stay tuned.

“The Raid” was a highly enjoyable episode. Robert Behrens’ script offered many of the things that viewers love about Supernatural. Kudos to the writing team for continuing to give us many returning elements from Supernatural’s rich history.