This article contains spoilers so if you haven’t seen the episode “The British Invasion” please do not continue reading.

Season 12 of The CW’s longest running show Supernatural has spent much of its time devoted to The British Men of Letters (BMOL) and how this organization’s methodology of eradicating the world of monsters is strikingly different from the American hunters’ approach, particularly that of Sam and Dean Winchester (Jared Padalecki and Jensen Ackles). A treasure trove of impressive weaponry to achieve the noble goal of defeating supernatural evil, I would argue, doesn’t mask a far-reaching and sinister objective I suspect that is percolating beneath the surface.

So far: torture (of Sam Winchester by Lady Toni) and the murder of others has been the BMOL’s modus operandi. In addition, the BMOL effectively appealed to Mary Winchester’s (Samantha Smith) desire for a monster free society so that her boys can finally live a normal life as a means of recruiting her to work on their behalf. Perhaps even more surprisingly given their history with the BMOL is that Sam and Dean have forged an unholy alliance (albeit reluctantly) with the organization. Mr. Ketch (David Haydn-Jones) seems to belong to “the ends justify the means” school of thought. In contrast, his associate Mick Davies (Adam Fergus) wrestles with his conscience as he does the BMOL’s bidding, as revealed by his remorse in having to kill the lycanthropy afflicted Hayden and his desire to help the similarly afflicted Claire Novak (Kathryn L. Newton).

In tonight’s episode “The British Invasion”, we learned more about Mick’s past with the BMOL and we welcomed back “Woman of Letters/Legacy” and hunter Eileen Leahy (Shoshannah Stern). 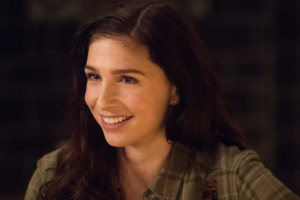 The episode begins with a flashback from 1987 where we see two promising young cadets at Kendrick’s Academy (The British Men of Letters’ answer to Hogwarts). Apparently, the BMOL has a code of loyalty and obedience. In the “only one can survive” edict, Michael (who is a young Mick Davies) proves the victor when he reluctantly kills his friend, Timothy.

Present Day: Mick is tortured by memories of killing his friend and later reminded by the Kendrick’s Headmistress, Dr. Hess (who he still receives his orders) that the Winchesters must tow the line. She calls Sam and Dean “mangy colonials” and warns that if they don’t assimilate, they will be eliminated. Soon, Kendrick alum Renny is dispatched to make sure that Mick continues to follow the code.

Sam and Dean receive intel on Kelly Kline from Eileen Leahy. I like the unspoken looks that Sam and Eileen give each. Clearly, these two have been in contact with each other after killing the banshee last year. There is a tenderness and comfortable familiarity that transcends the acquaintance interaction we first saw last year in “Into The Mystic.”

When Mick invited himself over to the bunker, Mick revealed tidbits of his childhood to the boys: Without his parents from an early age, he led an Oliver Twist like existence on the streets as a pickpocket until the BMOL (seeing his potential) took him in. Mick tells the boys that he owes the BMOL his life. I felt a chill by Mick’s last statement that felt suspiciously like the cold of foreshadowing. Mick owes the BMOL his life. More on that later.

Meanwhile, Lucifer (Mark Pellegrino) is still Crowley’s (Mark Shepphard) prisoner but Satan has been communicating telepathically with Dagon (Ali Ahn), querying the Princess of Hell about Kelly Kline (Courtney Ford) and the well-being of “Baby Lucifer.” Further, Lucifer (while feigning subservience to Crowley) has been surreptitiously rallying Hell’s minions over to his side.

Renny goes to the bunker to see Mick and later meets Sam, Dean and Eileen. The esteemed Kendrick’s grad boasts his stellar academic credentials to Mick and the hunters. News flash: The hunters don’t care!

Mr. Ketch (David Haydn-Jones) is hunting with Mary (Samantha Smith) and the two have a dalliance. Did you hear that? That’s the loud sound of complications pounding on the door. This is so not going to turn out well.

Free will has been a prevailing theme throughout the life of Supernatural and this episode punctuated that theme. When Eileen accidentally shoots and kills Renny (Eileen was aiming for Dagon), Mick is prepared to kill her. The BMOL code is an absolute that impedes individual choice. Fortunately, Sam is able to talk Mick down; he allows the hunters to leave. 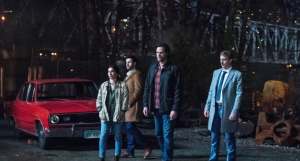 Eileen is heartbroken that she killed a man. The fact that the shooting was an accident does little to ease her guilt. Shoshannah Stern did a marvelous job portraying Eileen’s pain.

In the end the aforementioned foreshadowing (Remember Mick saying he owed the BMOL his life) comes back to rear its head when he is fatally shot by Mr. Ketch for refusing to abide by the BMOL code to kill Eileen.

With only six episodes remaining this season and with the bloodthirsty BMOL out to eliminate not only the monsters but the Winchesters as well, it will be interesting to see what happens (especially now that it seems that Mr. Ketch has developed feelings for Mary).

“I’ve given you an order now you do your job.” These words were said by  Supernatural’s John Winchester (Jeffrey Dean Morgan) to sons Sam and Dean (Jared Padalecki and Jensen Ackles) way back in the Season One episode “Dead Man’s Blood.”  We learned early on that following orders and doing your duty was a code that the Winchester boys (especially Dean) lived by.  Duty and family were the two invisible badges that Sam and Dean wore. But as we’ve seen over the years, doing your duty and following orders is not so simple. And if you question an order (like Sam often did in the early seasons of Supernatural), does that make you less loyal to your family?  Such was the dilemma facing British Men of Letters operative (Mick Davies) in the recent episode “The British Invasion.” Since his association with Sam and Dean in which he’s witnessed how they hunt, Mick has struggled with blindly doing everything The British Men of Letters (BMOL) told him.  Supernatural delivered a little backstory for Mick in the episode.  Apparently, Mick knew neither his mother nor father and the BMOL became his surrogate family. As a boy, Mick was taken in by the BMOL after he was caught stealing from a member’s pocket. The organization saw potential in the young Davies and welcomed him into their ranks.  At Kendrick’s Academy in 1987, Michael (as he was called) was given a test by Headmistress Hess (Gillian Barber). He and his best friend Timothy at the time were summoned to her office and told that the most important trait of an operative of the organization in which they were studying to become members of was the ability to follow orders without question. Headmistress Hess then left a knife on the desk and told the boys that only one of them would be leaving the room. Michael killed his friend Timothy and the now adult Mick was haunted by this sad memory. 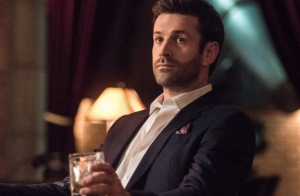 When returning hunter Eileen Leahy (Shoshannah Stern) kills BMOL Renny Rawlings by accident while trying to shoot Dagon (Ali Ahn) with The Colt, as part of BMOL code, which states that anyone who kills a BMOL must pay with their life, Mick attempts to kill her.  Sam and Dean are able to talk him down and save Eileen’s life.  But Ms. Leahy is clearly shaken by having killed a human and not a monster. Sam offers comfort. I couldn’t help but notice a closeness between Sam and Eileen- when did this happen? Have Sam and Eileen secretly stayed in touch for the last year? Regardless, there was a sweetness about them that brought out an innocence in Sam that we haven’t seen in years.  It would be nice to see where this goes but sadly, I get the feeling that this was a one-shot episode thing as we’re told that Eileen returned to Ireland. 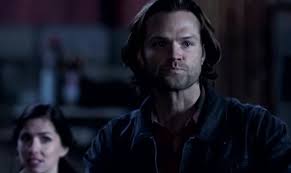 And what’s with Mary and Mr. Ketch? (Samantha Smith and David Haydn-Jones).  It seems like hunters make strange bedfellows. But I get the feeling that Arthur Ketch likes Mrs. Winchester more than he cares to admit. Things have just gotten complicated as the episode concludes, Hess orders Ketch to kill ALL the Winchesters after Operation Recruitment of the American hunters is terminated.

The British Invasion was an interesting episode to explore Mick Davies’ loyalties to the BMOL.  In the “No Good Deed Goes Unpunished” tradition, Mick spares Eileen’s life only to lose his own. I was happy to see Shoshannah Stern back as Eileen and hope this wasn’t the last we see of her. And will Mr. Ketch follow orders and kill the Winchesters (in particular Mary)? Stay tuned.