I had the opportunity to chat with Rolla Selbak, the award winning filmmaker behind the short film Choke. I would like to thank her for taking the time to answer my questions and share so much about her recent Outfest screened film.

Could you tell our readers a little bit about yourself?

I’m a triple-minority in the film industry: a queer, Muslim-American woman.

I’m a writer/director of film and TV drama, known for bringing strong female characters to the forefront of my work. I imprint my point of view as a queer Arab immigrant having escaped to the U.S after the first Gulf War, and often focus on socially controversial topics.

Most recent credits include co-producing AMERICAN PARADISE, a reflection of a desperate man in today’s racially divided America, and helming the internationally acclaimed feature film THREE VEILS, a first of its kind to confront homosexuality within the Muslim-American subculture.

How would you describe your short film Choke?

CHOKE is about a successful MMA champion who hides her refugee identity from her small American town, and the world. Sara and her family are Muslim refugees who’ve escaped the vicious war in Syria and flee to the Unites States, where she fights for a new life in the brutal sport of mix martial arts.

I tell the experience of what it feels like to immigrate from your home to a new place you’re trying to fit into, especially in today’s climate. 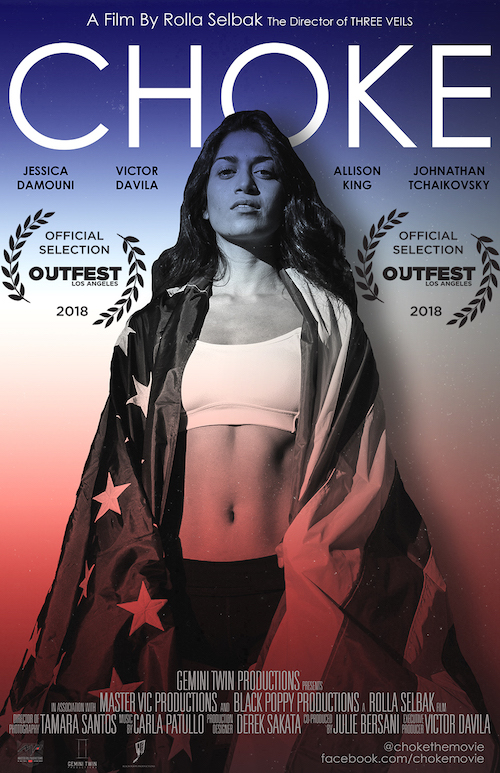 What inspired this film?

It’s both a challenge and an honor to depict an authentic refugee experience truthfully and with creative empathy. Being an immigrant myself and being part of a Palestinian family, I feel that my personal experience lends itself to this intent in a powerful way.

The central themes of identity, racism, and fear are heightened by Sara’s struggle between modesty and boldness, aggression and repression, and oscillation between pride of who she is, and shame of where she came from.

What do you hope viewers take away from Choke?

The words “Muslim” and “immigrant” are so charged with electrifying heaviness in today’s environment. Just when we think the anti-immigrant sentiment has reached fever pitch in this country, the spikes of vicious rhetoric push the stakes higher.

I truly believe it’s time for a different kind of immigrant story, one that offers a counter-illustration to the depictions of brown women on the screen as the devout wife, or the unsuspecting terrorist, or depicting refugees as being weak and powerless instead of strong and resilient.

Choke is a series about identity, and the choices we make to hide parts of ourselves in order to survive. Incidentally, Sara’s last name, Beda, means “white” in Arabic.

What was the experience of debuting it at Outfest like?

It was phenomenal, a truly ethereal experience. I remember sitting in the audience at the festival years ago, watching films I connected with, dreaming of the day when I myself would have my work screened at a place that meant so much. A place to celebrate, activate, and feel at home. Outfest always reminds me why film and family are so important.

Will Choke be screening at any other upcoming festivals?

Where can our readers find out more about Choke?

Where can people find you online?

Thank you again to Rolla Selbak for this interview and for sharing such personal and emotional stories within her work.