It’s a new year. Which means new intrigue in Port Charles. Many new characters were introduced to the soap opera’s canvas in 2016 and became a part of some interesting plots.  There were also changing developments for some current characters. Here are the 5 General Hospital stories I’m excited for in 2017.

Sam and Jason’s baby.  They’re having a baby! Who would have thought we’d hear these words about General Hospital’s Sam (Kelly Monaco) and Jason (Billy Miller), especially when Sam believed her husband was dead. But this super couple were reunited despite Helena, Elizabeth and Nikolas’ efforts to keep them apart. And surprise, Sam discovered she was pregnant!  Now the happy couple is expecting another child. Boy or Girl? That’s what eager General Hospital fans (like myself) are curious to find out. 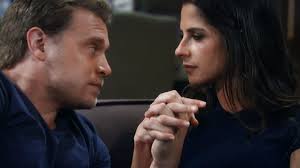 Sonny/Carly/Nell.  Who is Nell Hayes? And what is she up to? When she first came to Port Charles, Nell was revealed to be the donor for Jax (Ingo Rademacher) and Carly’s (Laura Wright) daughter Josslyn.  A grateful Carly welcomed Nell (Chloe Lanier) into the lives of the Corinthos family. But Nell drugged Sonny (Maurice Benard) and made it look like they slept together.  Carly separated from her husband following the circumstances of their son Morgan’s death.  Now, it seems as though Mr. and Mrs. Corinthos are finding their way back to each other. Nell has other plans.  And what’s the deal with the rattle?

Lulu and Dante vs. Nina and Valentin.  Viewers of General Hospital know that Lulu (Emme Rylan) has wanted another child with husband Dante (Dominic Zamprogna).  Although a medical condition prevented her from carrying a baby to term, Lulu hoped through surrogacy to use her last frozen embryo. Imagine her shock when she discovered that it had already been used, by Valentin Cassadine (James Patrick Stuart) to help conceive his daughter Charlotte and that Claudette was the surrogate.  And to complicate matters, Nina (Michelle Stafford) began a relationship with Valentin and wants a child. Now the former Ms. Reeves has become Mrs. Valentin Cassadine and it looks like a custody battle is brewing. Who will end up as Charlotte’s parents?

Alexis’ Drinking/Alexis and Julian Reunion. When your husband lies to you, tries to kill you and wants you to take the blame for a murder he committed, it’s enough to drive you to drink.  But unfortunately, Alexis’ drinking has gotten out of hand and she now has a full blown alcohol problem. Alexis (Nancy Lee Grahan) ran Julian (William de Vry) over with her car.  But he didn’t turn her over to the police, instead Julian convinced/blackmailed Alexis into helping to take care of him as he recuperates. He is determined to win her back but first, he’ll need to stop her drinking.

Franco and Elizabeth.  This was an unlikely pairing that seems to work. Elizabeth (Rebecca Herbst) brings out the best in Franco (Roger Howarth), who is determined to prove he’s no longer a sick, dangerous murder.  Plus, he is devoted to her children. But Franco’s attempts to be Elizabeth’s white knight often causes him to make bad decisions. Like locking Tom Baker, Elizabeth’s rapist, in a dog cage so he’d miss his parole meeting and be sent back to prison. It backfired. Tom Baker was murdered and Franco is the prime suspect. He insists that he’s innocent. Does Elizabeth really believe him? Does this couple have a future? 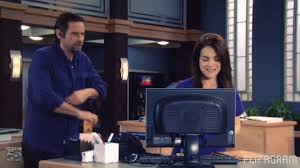 What stories are you excited to see in 2017? Comments? Sound off below.  Or tweet @thenerdygirlexp and @stacyamiller85 .