Did you know Chyler Leigh was in a legal drama in 2002? I have a feeling almost no one knows this happened, but yes in 2002 she was one of the three lead characters in Girls Club. The series was very short lived and was cancelled after just two episodes, but the first episode still exists on YouTube. Normally I wouldn’t direct you to what is a very low quality video that appears to have been recorded with a VHS tape, but Girls Club exists nowhere else that I can find on the internet and with the early cancellation it appears that only the very first episode was ever saved by the magic of the internet.

END_OF_DOCUMENT_TOKEN_TO_BE_REPLACED

Happy Saturday ClexaConners and everyone checking out this coverage. I’ve got my breakdown for the very full Saturday of ClexaCon for you right here. Again please note there will be minor gaps in coverage where I am taking part of private elements or won’t be able to live tweet or stream. Today is a big day because I’ll actually be presenting on a panel today! You can follow our coverage on our Twitter account, @thenerdygirlexp, and I’ll also be sharing a bit from my personal account, @kleffnotes. Please note all times listed in the article are West Coast/PST specific. END_OF_DOCUMENT_TOKEN_TO_BE_REPLACED 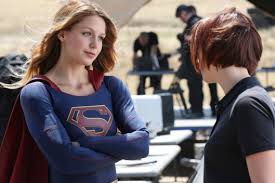 When it was announced that a new version of Supergirl would be airing on television, I knew I would be watching. As a longtime fan of the heroes of Krypton, Superman and his cousin, Kara a.k.a Supergirl, I was curious what this new adaptation would be like. But since it was in the capable hands of Greg Berlanti, I had no doubt it would be something special. END_OF_DOCUMENT_TOKEN_TO_BE_REPLACED