BH90210 is an upcoming American comedy/drama television series set to air on August 7, 2019 on FOX. It is the sixth series in the Beverly Hills 90210 franchise. Original series stars Jason Priestley, Shannen Doherty, Jennie Garth, Ian Ziering, Gabrielle Carteris, Brian Austin Green and Tori Spelling will return in the new series, playing themselves in a heightened version of reality that is inspired by their real lives and relationships, in which the actors deal with launching a reboot of the 1990s TV series, Beverly Hills 90210 (Wikipedia).

Season 1 Episode 1 is titled “The Reunion” Here is the synopsis from TV Guide: “In the premiere, the “Beverly Hills, 90210” cast reunites at a 30th anniversary fan convention in Las Vegas, causing old flames, feuds and feelings to reignite. At the end of the weekend, Tori suggests that they get a “90210” reboot off the ground.” 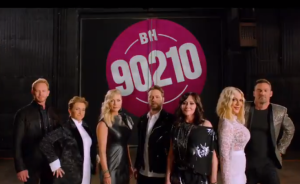 What do you think of our opening credits!? 😎 #BH90210 pic.twitter.com/JjkSqkZGf8

She's back and better than ever 😍 — are you ready to reunite with @TheGabrielle_C in one week?! #BH90210 pic.twitter.com/RWSaZdzxnu

Some things change, but @IanZiering never will! ❤️🙌 #BH90210 pic.twitter.com/EUa2uS6SSd