On October 27, 1997, The WB aired the Buffy the Vampire Slayer episode “Halloween”.

Remember when Buffy and the gang wore cursed Halloween costumes that caused them to take on the personality of the characters they pretended to be?

Our Blast From The Past takes a look back at the Season 2 episode “Halloween.” Buffy the Vampire Slayer was cool because it showed a girl with super strength known as The Slayer battling vampires and other forces of evil while also battling life’s growing pains. A lot of the episodes were metaphors for taking the journey from teendom to adulthood.
All Buffy wanted was to be a normal girl. Well as normal as one could be fighting monsters and loving a vampire. When Buffy sees a picture of a 18th century noblewoman, she thinks that’s the type of girl Angel prefers and dresses like one for Halloween. But neither she, Willow nor Xander realize Ethan Rayne, a man from Giles’ past, cursed their costumes. So, Buffy is fragile and helpless, Xander is a real life soldier and Willow is a ghost. Only Cordelia, who got her cat costume from another store is unaffected. 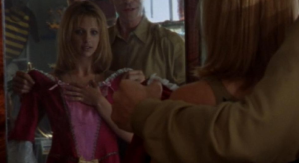 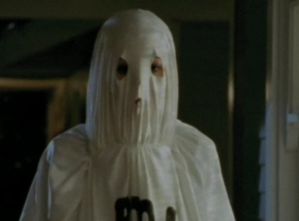 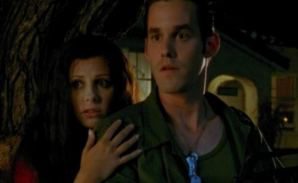 Buffy, Xander and Willow take on different roles in the episode. Instead of protector, Buffy needs protecting. Willow and Xander take charge throughout the episode, proving they are more than Buffy’s sidekicks.
By episode’s end, the gang realized they are who they (and the world) need them to be. The lesson of the episode was to appreciate who you are because you’re special.

2 thoughts on “Blast From The Buffy the Vampire Slayer Past: Halloween S2Ep6 via @stacyamiller85 @BuffyTVS #Buffy #BuffytheVampireSlayer #Halloween”