I want to wish The 100 ‘s Lindsey Morgan a very Happy Birthday!

Fans have fallen in love with actress Lindsey Morgan, who plays Raven Reyes on The CW’s hit series The 100.  But I have been a fan of Lindsey’s for much longer. 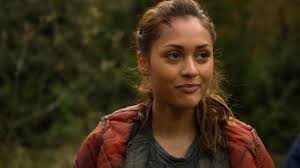 I first fell in love with the talented actress when she played Kristina Corinthos Davis on ABC’s long running soap General Hospital in 2012. It couldn’t have been easy acting opposite veteran soap actors Maurice Bernard and Nancy Grahn but Lindsey was a natural as the daughter of Sonny and Alexis.

Check out this scene:

Tell me, does this girl have talent or what? She was the perfect choice to bring Raven to life!

Lindsey, may you have a great birthday and continued success with your career!

Comments?  Sound off below. Or tweet @thenerdygirlexp and @stacyamiller85 .

One thought on “Happy Birthday #The100 ‘s @linzzmorgan ! via @stacyamiller85 @JRothenbergTV”