If you’ve been watching and tweeting along with me during my #BuffyLiveTweet sessions you will know that I just finished watching What’s My Line? Parts 1 and 2 from season 2 of Buffy the Vampire Slayer. These episodes have assassins, a crazy ritual, and the first ever appearance of Kendra the Vampire Slayer. I thought since we had a brand new slayer that I would do a character profile about the hard studying, kick butt Kendra.

When I first watched Buffy I remember being shocked when Kendra showed up in Sunnydale. You’ve been told since season one that into every generation there is only one slayer and then suddenly a second slayer shows up, inconveniently at the same time as a team of assassins. Kendra gives off a very assassin vibe, not her fault, she’s just very focused on her work as a vampire slayer and doesn’t think about anything else, but fighting the things she thinks are evil. 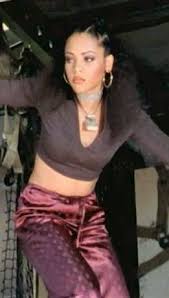 Besides being an intense fighter, Kendra is basically her own Scooby Gang. Watching her nerd out about texts and research with Giles is one of the cutest things in these two episodes. They laugh and just get into all sorts of adorable bantering. Sadly the reason that Kendra is so full of research knowledge is because she’s been raised by her Watcher since a very young age to be prepared to be the perfect Slayer, should she be chosen. Since she has been a bit of a slayer prepping hermit, her social skills aren’t as well tuned as Buffy’s. Which is really cute to see, because she totally has a crush on Xander and he doesn’t even notice. I mean he did want a slayer as his girlfriend.

There is one really weird thing about Kendra’s appearance and that’s the lack of her Watcher. Giles knows who her Watcher is, but we never see or hear from him throughout this two episode arc. Now that would be fine, if I didn’t feel like he had just sent Kendra to Sunnydale to fend for herself. She says she’s there to do her duty, but it looks like her Watcher doesn’t think she’ll need him in the super crazy city of the Hellmouth. I’m pretty sure it’s against protocol to just leave your slayer to her own devices in a random city, but I mean I didn’t go to Watcher school so I could be wrong. I just wonder why no one from Watcher HQ called Giles to see how he was doing or if he was still in Sunnydale. Was he supposed to just accept Kendra as his own when she showed up? I don’t know, but Kendra’s lack of Watcher just seems weird to me. 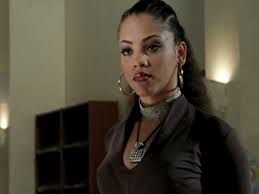 On an actress related note, Bianca Lawson is fabulous as Kendra. She’s a great actress and has appeared in so many shows, including Pretty Little Liars and The Vampire Diaries. The one thing though that astonishes me about her is that she looks like she never ages. That’s totally a compliment, she’s gorgeous and I’m guessing she is going to continue looking gorgeous for eternity.

Want to share your Buffy the Vampire thoughts? Comment below or tweet at us, @thenerdygirlexp. If you want to join in on the #BuffyLiveTweet sessions you can find me on Twitter, @kleffnotes, I do them sort of sporadically. You can also find me on my blog, kleffnotes.wordpress.com, and on my kleffnotes YouTube channel. I also run The Nerdy Girl Express Snapchat, thenerdygirlexp.

One thought on “#BuffyLiveTweet Character Profile: Kendra the Vampire Slayer (played by @BiancaLawson) from @kleffnotes”