Season 3 Episode 1 is titled “The New Normal” Here is the synopsis: “Picking up right after the heartbreak, romances and uncertainties from the season two finale in Paris, Jane, Kat and Sutton are back in New York City and dealing with the aftermath of some major decisions. Scarlet Magazine brings in Patrick Duchand to run the digital branch, effectively knocking Jacqueline down to only running the print magazine. Meanwhile, Jane has picked her guy, but is frustrated that a man is put in charge of a women’s magazine. Kat struggles to keep up happy appearances on social media and as a speaker at the Scarlet Summit, while secretly suffering heartache, and Sutton and Richard enjoy their romance in the limelight and discuss moving in together.” 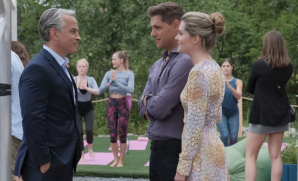 Season 3 Highlights: Sutton getting it, Tiny Jane shaking it, and Kat running it. #TheBoldType pic.twitter.com/3t7Z9k0bui

Don’t miss the Season Premiere of The Bold Type “The New Normal” airing Tuesday, April 9, 2019 at 8/7c on Freeform.