United We Fall is an upcoming American television sitcom created by Julius Sharpe that is set to premiere on ABC. It stars Will Sasso and Christina Vidal as a couple with young children whose household is turned upside down when his mother (Jane Curtin) moves in with them. (Wikipedia).

Season 1 Episode 3 is titled “Date Night” Here is the synopsis: “Bill and Jo reluctantly ask Sandy to babysit after Chuy and Brie convince them to join their weekly date night. Bill and Jo discover they’re a bit rusty at romance, while Sandy discovers she’s a bit rusty at parenting.” 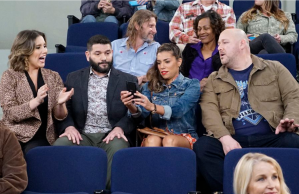 #UnitedWeFall is the new family comedy that has all the fun we need! Tune in tonight at 8|7c. pic.twitter.com/fxuoSCCTbV