“In 1849, Kingsman Tailors have clothed the world’s most powerful individuals. In 1919, a great number of them had lost their heirs to World War I. That meant a lot of money going uninherited. And a lot of powerful men with the desire to preserve peace and protect life. Our founders realized that they could channel that wealth and influence for the greater good. An independent international intelligence agency operating at the highest level of discretion Without the politics and bureaucracy that undermine the intelligence of governmnet-run spy organizations. A suit is the modern gentleman’s armour. And the Kingsman agents are the new knights.”- Harry Hart, Kingsman agent 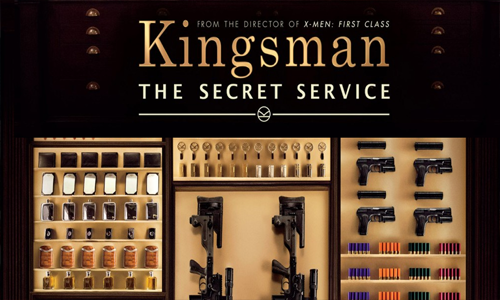 Now if that doesn’t make you wanna see Kingsman The Secret Service, if you haven’t already seen it, then let me see if I can convince you. The movie came out last year, it’s a British/American spy movie. After looking it up, I found that it is based on a comic book by Dave Gibbons and Mark Millar called The Secret Service. Is it just me or are comic book movies just getting better and better?

I have literally watched this movie at least 20 times now, if not more. The action is intense, mind blowingly intense. The movie stars Colin Firth, Michael Caine, Samuel L. Jackson, and the brilliant (and gorgeous) Taron Egerton.

The film starts out with some masked Kingsman on a raid in the middle east. A probationary agent sacrifices himself in order to save his unit. Harry Hart (Firth), code name Galahad,  feels guilty over his colleague’s death delivers a bravery medal to his widow. Harry tells her and her son Eggsy, that if they ever needed anything, to call the number on the back with a secret coded message.

Flash forward 17 years and Eggsy is in jail and calls the number. Harry comes and bails him out. After a conversation and a bad ass bar fight that leaves you in shock and awe, Harry offers Eggsy a chance to become a secret service agent, a Kingsman, after losing another agent. Upon arriving at the training center, Eggsy learns he’s not the only candidate up for the Kingsman position. Meanwhile, the world’s top people are disappearing around the world. The mastermind behind these kidnappings is Internet billionaire Valentine (Jackson).

Valentine believes the world is in trouble and he is the one to fix it, by any means. His reasoning is kind of smart, as in it kind of makes sense, but he’s still the bad guy and getting rid of people is bad, very bad. He chooses people he wants to “save” and puts a little implant behind their ears. The people not chosen are all given free SIM cards for their phones with the promises of free phone and Internet service for life.

Eggsy messes up and doesn’t fulfill a task and is booted from the Kingsman. A very angry Harry tries to explain the tasks to Eggsy but gets interrupted by a mission and tells Eggsy not to move, he’ll deal with it all when he gets back. In a church scene that I found so so so funny, Valentine preforms a test, sending out signals to those SIM cards and makes everyone go crazy. More epic fight scenes, like Firth is one kickass spy. Bond ain’t got nothing on him hehehe. Eggsy is watching this all go down on a computer from a camera on Harry.

Valentine gets rid of Harry and Eggsy sees it all. He rushes to Arthur, Harry’s boss and notices Arthur has an implant. Arthur tries to explain things to Eggsy, but he isn’t having it. Arthur is offed and Eggsy goes in search of allies and finds Merlin, who was in charge of the candidate tests and Roxy, code name Lancelot, who was the candidate who passed all the tests and became a Kingsman. The three of them go off the in most awesome, thrilling, kickass adventure to stop Valentine from killing most of the world’s population. I absolutely am in love with this movie. It ended brilliantly! I honestly couldn’t have asked for a better ending. This movie had a lot of funny lines, a lot of amazing action, it was just a fun movie all around.

It has been confirmed there will be a sequel to this movie, the release date has been announced for June 16, 2017. I am so very exciting for this. I cannot wait to see what they’ll do this time around. I will be looking out for any info on this upcoming sequel and will pass on any and all I find out.

Let me know what you guys think! You can leave comments here or find me on Twitter @thenerdygirlexp