Proven Innocent follows an underdog criminal defense firm led by MADELINE SCOTT (Rachelle Lefevre, “Under the Dome,” “A Gifted Man”), a fierce and uncompromising lawyer with a hunger for justice. There is no one who understands the power of setting an innocent person free more than Madeline. At age 18, she was wrongfully convicted, along with her brother, LEVI (Riley Smith, “Frequency”), in a sensational murder case that made her an infamous media obsession, a household name and a national cause célèbre.

While a hero and a victim to some, Madeline’s bold and bullish tactics earn her a number of enemies – especially GORE BELLOWS (Emmy Award and Golden Globe winner Kelsey Grammer, “Frasier,” “Cheers,” “Boss”), the prosecutor who initially put her away and still believes in her guilt. Despite Bellows’ ceaseless quest to see her behind bars again, Madeline will continue to defend others, even as she fights to maintain her innocence and searches for the real killer in her own case.

PROVEN INNOCENT is produced by 20th Century Fox Television, in association with Danny Strong Productions. The pilot is written by David Elliot. Strong, Elliot and Stacy Greenberg are executive producers. Adam Armus is an executive producer and showrunner. (Fox.com)

Season 1 Episode 2 is titled “The Burden of Truth” Here is the synopsis from TV Guide: “The Injustice Defense Group opens a case with Tamara Folsom, a rape victim convicted unjustly of murder. In addition to Tamara’s case, Madeline comes to Levi’s defense after he lands himself in hot water, but she uncovers a secret about his past that makes her question him. Meanwhile, Easy struggles to balance his work and family life.” 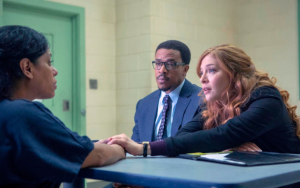 Do not stay silent. 🗣#ProvenInnocent airs Friday at 9/8c on @FOXTV. pic.twitter.com/rnognJN34X