To that end, the Sally Rollman Ovarian Cancer Foundation works tirelessly to get funding for ovarian cancer research. Part of that involves organizing events. GH Fantasy Events is responsible for numerous chances for fans of ABC’s General Hospital to meet their favorite actors from the long running daytime drama.

During the Q&A, the actors answered a variety of questions. 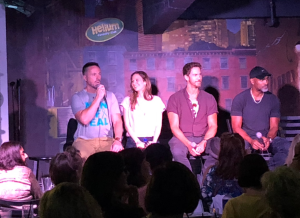 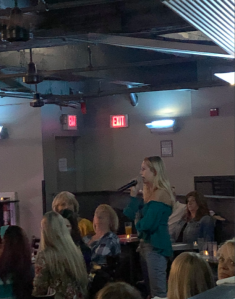 I asked the question why taking part in the event meant so much to them.

The General Hospital actors all agreed in addition to meeting the fans who enjoy their work on the long running ABC daytime drama, it was important for them to help raise awareness for ovarian cancer research. Eden McCoy said as a woman she knows how vital it is educating yourself, adding “ovarian cancer doesn’t discriminate between rich and poor, young and old or famous and non-famous.”

A few fans shared why ovarian cancer education was crucial as one fan’s mother passed from the disease and another survivor didn’t even have a history of it in her family. Robin Cohen stressed not waiting until being diagnosed with ovarian cancer to discuss your family’s medical history with them.

William deVry urged to not only use social media to spread the world but if possible survivors should go on their local news shows to help further foster ovarian cancer awareness.

What famous actor have the actors been starstruck in meeting? For Tamara Braun, it was Morgan Freeman. And when Donnell Turner was starting out in the business, he met Mr. T.

On why they prefer working in daytime vs. prime time, Wes Ramsey (Peter) had this to say:

@wesramsey loves working on #GH and daytime because of its longevity he can focus on the work instead of constantly worrying about the show getting picked up like what often happens with primetime. @GeneralHospital @GHFantasyEvents #GH56 pic.twitter.com/TBLqiPXxwk

If they weren’t actors, what would they be doing?
Wes Ramsey revealed he writes poetry and will be having a book of poems available on his website. Tamara Braun wanted to help people find comfort through giving therapeutic massages. Donnell Turner played basketball and would love being a coach and mentor to kids to help them develop a strong sense of self and values. Eden McCoy has a variety of interests such as volleyball as General Hospital fans know.
A fan wanted to know about the new General Hospital eatery set where Curtis and Laura (Genie Francis) were discussing Helena. Donnell responded that it is a bistro. “Approximately named The Bistro,” he said.
When asked about SORAS (The basic definition of SORAS is the process whereby infants, toddlers, tweens and teens are aged in a rapid fashion in order to spice up their storylines and make their characters more interesting), Eden McCoy and Donnell Turner had some comments.
“Josslyn should be twelve” – Eden
“My wife Jordan (actress Briana Henry) is only two years older than her television son”- Donnell
There was a hint that the character of Spencer Cassadine could become the next victim of SORAS.
In a fun moment, Robin showed a blow up of a photo Eden McCoy recently posted on Twitter of the GH actors’ younger selves. Robin obtained wigs in order to recreate the hairstyles. William deVry and Wes Ramsey proved what good sports they were by donning the hair pieces. 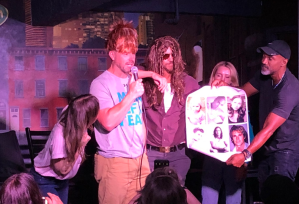 Prizes of a selfie on stage with the actors, a calendar signed by the cast and two tickets to the next event were awarded to the raffle winners.
The event was a huge success. A $50,000 donation was given to Fox Chase Cancer Center to help them continue with their research in the hope of someday eradicating ovarian cancer. 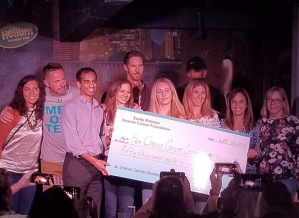 A private dinner with the actors was held later that evening. 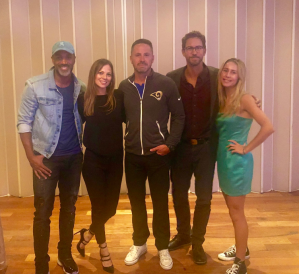