Kathleen Gati has appeared in numerous film and television roles. But it is the character of Dr. Liesl Obrecht on ABC’s General Hospital that made multitudes of fans passionate to view her performances. To say that Liesl is a villain is over simplifying the magnitude of Gati’s portrayal. On August 24, 2012, Kathleen first appeared on General Hospital as Dr. Liesl Obrecht. In six short years, Kathleen Gati took what was originally slated to be a short term part and expanded it into something more. Because of Gati’s acting skill, Liesl is hard to figure out and keeps viewers guessing.

I am an admirer of Kathleen Gati’s work and was pleased when she agreed to be interviewed for The Nerdy Girl Express.  What did she have to say about Liesl? Read below to find out.

What have you learned as an actress by playing a character like Liesl?
“That a character can have SO many many different colors, behaviors, good days and bad, be evil and caring, and that she can do so many things (through me) that most roles don’t require or allow…including singing and dancing and being funny and evil and serious…you get the picture!”
What is it about Liesl that you feel has endeared her to fans despite her crimes?

“That she can be warm, loving, tender, funny…can sing and dance at the worst times and I think the writers have done a tremendous job “softening” Dr. Obrecht’s nasty side to keep the audience from totally hating her!!”

Do you think Liesl went too far by kidnapping and torturing Peter?

“Absolutely too far! But she IS Liesl so….is there “too far for her?”

How could she have handled the situation?
“By being introspective, realizing her responsibility in the death of her son, Nathan… perhaps being gentler with others and more forgiving….Oh, what am I saying! She is Obrecht! So not gonna happen!!!”
Liesl began talking about her troubled childhood while discussing the sequel to The Severed Branch with Peter. Would you like to see more of her back story explored? 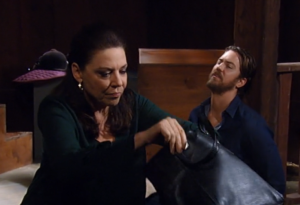 “I would love to see more of her back story exposed and explored, as would so many fans from all the messages I have been receiving. People would understand her behavior  better, but not her dark evilness….there’s no excuse for that!”

If it wasn’t for Cesar’s obsession with Anna and Liesl’s jealousy because of it, do you feel that Liesl and Anna could have become friends otherwise?

“Liesl doesn’t trust anyone or take friends in…she is not of the warm and fuzzy ilk.”

You’ve played some dynamic scenes as Liesl but are there any that stand out in your mind that you are especially proud of?

“Nathan’s death, the Nurses Ball, particularly the Cabaret number in 2014, the recent material with Peter and Nina…the drunk scene with Anna…anytime I can do something funny to make the audience laugh, it’s a long list from the over 300 episodes!!!”

If you weren’t planning Liesl, is there any other character on General Hospital that you would have loved to have played?

“No. I have the most fun and colorful character on GH…who could ask for more?”

You have an extensive resume and have appeared in other projects besides General Hospital.

“Almost 35 years in the business…there are many different roles I’ve played. With a great variety to keep me interested in this tough career!”

Have you ever tried your hand at directing?  If not, would this be something you’d be interested in?

“I have coached and prepped actors for auditions, but I’m not interested in directing.”

Is there anything you’d like to say to our readers?

“I love portraying Dr. Obrecht and I can’t thank the fans enough for all the love and support and terrific comments over these past six years!”