After bringing their three babies home in last week’s pilot, episode two begins several years in the future with Rebecca (Mandy Moore) making breakfast for her three 8-year-olds Kevin, Kate and Randall (Parker Bates, Mackenzie Hansicsak and Lonnie Chavis). Young Kate wants something more to eat but is reminded by her mother “We talked about this.”  So even as a child, Kate struggled with her weight and eating issues.  Jack (Milo Ventimiglia) enters the room and playfully helps his daughter with her breakfast selection. But it’s obvious that this family loves each other and sees themselves as a team by the cheer that they’ve come up with. Jack: “Deep breaths and first came” Young Kevin “Me”  Jack: “And Dad said gee. And then came.” Young Kate “Me” Jack: “And Mom said wee. And then came.”  Young Randall: “Me” Jack: “That’s 3.” The cheer ends with all of them hitting their chests and saying in unison, “Big three.”

In the present day, Kevin (Justin Hartley) has to face the consequences of his onscreen television meltdown.  His manager Laney (Katey Sagal) tells him that he is locked into his contract for another two years.  So, Kevin basically has to appear apologetic and grovel to the network executives or else lose his job and be an unemployed actor for two years.  Laney tells him that he can ‘make nice’ to the bigwigs at a party she’s having.

Kate (Chrissy Metz) is working out with Toby (Chris Sullivan) trying to lose more weight.  When Kevin tells her about what happened in his meeting with Laney, Kate offers support to her big brother and encourages him to ‘Manny Out’ meaning to tell the executives how he feels and even walk away if  it’s stressing him out so much. Kevin asks his sister to accompany him to the party, Kate agrees but is nervous. Still worried about the party, Kate attends her weight lose support group.  When one woman talks about tossing the Wendy’s food she brought uneaten out her car window while the other mentions her body issues and self-esteem, Kate argues that they both have problems, the first is a litterbug while the second weights about 135 and shouldn’t even be in that group! It is obvious that the party and the pressure of her weight is weighing (no pun intended) on her.  Toby (Best boyfriend ever!) tells her that he can come with her to the party.  Now all Kate has to worry about is finding the right outfit that fits.

In the past, Jack is at a bar having a drink with his friend Miguel (Jon Huertas) and is telling him about how Randall is being teased at school and being called ‘Webster’ ( Writer’s Note: For anyone unfamiliar with Webster, it was a television show back in the 1980s about a black boy who was adopted by a white family).  He is also talking about some problems he’s been having with Rebecca too but Miguel doesn’t have sympathy about that as he thinks Jack is extremely lucky to be married to a woman like Rebecca.  When he returns home, Rebecca talks about how she wants them to be ‘9’ parents for their kids but often feels like she comes in at a ‘6’.  Rebecca adds that Jack is a ‘10’ when he’s not drinking.  So, Rebecca sternly tells Jack that she needs him to “Be a man and fix it.” Jack promises that he will and be a ‘12’ for she and the kids. 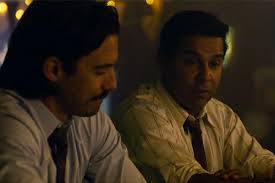 In the present, Randall (Sterling K. Brown) and Beth (Susan Kelchi Watson) are talking about William (Ron Cephas Jones) and how long Randall is planning on having his father live with them. Randall explains to his wife that he understands her concerns and has a few of his own.  But he feels that having William stay with them is a way to make sure he gets the medical treatment he needs.  The next day, Randall gives William some money and Beth is concern again that he will use it to support his drug habit.  Later, William tells them that he used the money towards a three hour bus ride to go back to feed the cat he takes care in Philadelphia. As their children have asthma, he knew he couldn’t bring the cat to their home. 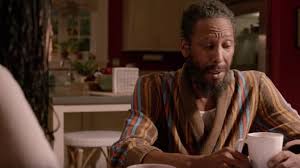 At Laney’s party, Kate feels uncomfortable and out of place as though everyone is laughing at her. Best boyfriend ever Toby again comes to her rescue and helps to get her to relax by piling her with drinks.  Soon, Kate is having fun as she and Toby tear-it-up on the dance floor. Kevin, however, is not having any luck when he talks with Mr. Manning (Brad Garrett).  ‘Manny Out’ doesn’t work as Manning tells Kevin to take whatever deal the network offers or don’t work.

Kevin calls Randall to get his advice.  Randall lends an ear and offers his support and when Kevin says “I was never a good brother to you,” Randall adds “You still got time.” And then in a scene that shows the siblings’ bond, Kevin, Kate (who left Toby and the dance floor to find Kevin) and Randall say ‘The Big Three’ cheer.

The episode concludes with Randall’s kids greeting Grandma and Grandpa who’ve arrived for a visit. In walks an older Rebecca…and Miguel!  So there are several questions: What happened to Jack? And, why did Rebecca marry Miguel?