This is an oldie but a goodie. A movie I use to rent from the local video store when I was a kid. As you can tell from most of my Blast From The Past posts, I didn’t exactly ever watch age appropriate movies.

This is a Wes Craven movie from 1986. The version that was released was not the original plot of the movie. This movie was suppose to be something entirely different. That being said, this is only a review of the released movie. Anyone who would like to discuss the original plot, feel free to leave comments, find me on Twitter, or email me at thenerdygirlexpress@gmail.com.

The film stars Matthew Labyorteaux, (who I first saw on Little House on The Prairie as Albert), as Paul, a  teenage science genius, who moves to a small town with his single mother, Jeannie. He makes friends with the local newspaper delivery boy Tom. It also doesn’t take long for Paul to notice his pretty next door neighbor Sam (played by the wonderful Kristy Swanson), who lives with her abusive father Harry. Our teenage genius has another friend, BB, a robot Paul built, and he happens to be very protective of Paul. Genius Paul, goes to a prestigious university after receiving a scholarship, meets with his new professor Dr. Johanson, and is given a tour of the new lab he’ll get to use. 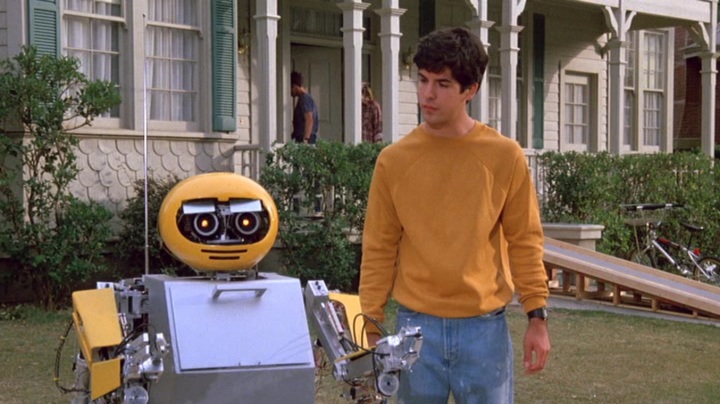 Paul and Tom teach BB how to be a newspaper delivery…robot. Along the route, they stop at the home of reclusive mean old biddy, Elvira, who’s not too happy with these boys or damn robot being on her property. Threatening them with a double-barreled shotgun, they leave. Walking away, they encounter 3 bikers led by Carl. Carl throws Paul in the trash and his best buddy BB grabs the jerk by the crotch. The bikers leave while swearing revenge. 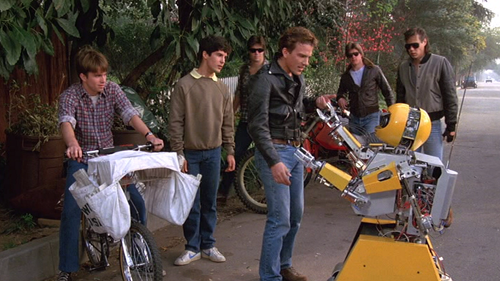 Paul, Tom, BB, and Sam start developing a close friendship, to Sam’s father’s dismay. One afternoon, the trio and BB play a friendly game of basketball. Missing a shot, BB accidentally throws the ball on Elvira’s porch. Mad, she stomps out of the house, grabbing the ball, refusing to give it back. BB won’t forget this.

Halloween night comes around and Sam shows up with a bloody nose asking for ice. (Damn abusive parents) Sam joins Paul, Tom, and BB as they head out. Tom has the brilliant idea of pranking Elvira’s mean ass. BB unlocks her gate, Sam rings the doorbell…they hide in the bushes. Ding-dong ditch, the good old days lol. When Elvira sees BB, she shoots him without second thought. Paul is heartbroken over the destruction of his friend.

Thanksgiving comes around and Sam joins Paul and his mom for dinner. After dinner, Paul and Sam share a sweet first kiss. She goes home rather late, which really makes her father irate. He punches her and pushes her down the stairs. She ends up in the hospital at Polytech. Paul learns at the hospital Sam is brain dead from her injuries, and will only be left on life support for 24 hours.

Paul gets to thinking, since BB’s microchip can interface with human brains, he believes he can use it to bring Sam back. Tom steals his father’s keys to the hospital, his father being a security guard there, and they break in. Tom disables the power in the basement and Paul takes Sam to his lab. He puts BB’s chip in Sam’s brain and takes her back to his house, hiding her in the shed. He activates the chip and she awakens. Unfortunately, it’s not Sam’s brain in control, it’s BB’s. 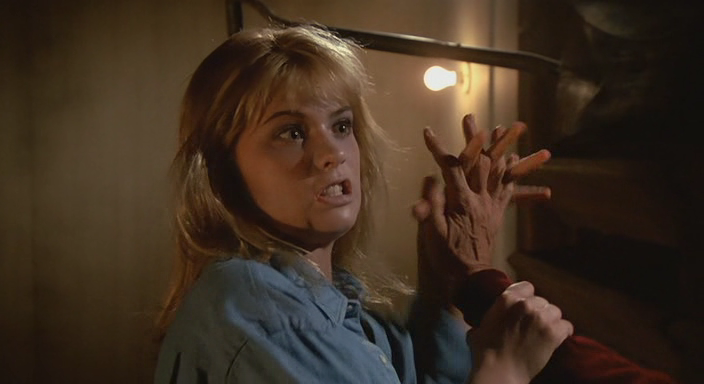 Cops arrive at Sam’s house, informing her father that her body is gone. In the middle of the night, Paul catches Sam staring at her house, at her father, which leads him to deactivate the chip. When Paul wakes the following morning, Sam is missing. He searches the street, finding nothing. Sam has gone to her house, down into the cellar. Her father finds the cellar door open and goes down to check things out. Sam attacks him, breaking his wrist and neck. Paul finds Sam and her dear dead dad in the cellar. He hides the body and takes Sam back to his house, locking her in his room. She gets out that night and heads to Elvira’s. Sam breaks in and throws Elvira against a wall. As Elvira screams for her life, Sam picks up the stolen basketball, throws it at Elvira’s head making it explode. So gross, so awesome watching a headless body walk around until it collapses.

Tom hears of the things Sam has done, he threatens to call the cops, which leads him and Paul into a fight. Sam jumps from Paul’s attic window and attacks Tom. Both Paul and his mother try to get her off of him. Paul slaps Sam trying to get her under control, this makes her turn on him. She tries to strangle him, but she lets go and runs away. Paul runs after her but is stopped by Carl. Sam stops and goes back for Paul, grabbing Carl and throwing him into an upcoming cop car, killing him. She runs back to Paul’s shed, where he finds her and realizes she’s getting some humanity back. She just needs something they don’t have…time. The police arrive with guns pointed at Sam. She yells out his name in her normal human voice. She runs towards Paul, trying to protect him, only to have the Sergeant shoot and kill her thinking she has going to attack.

Not ok with what happened, Paul breaks into the morgue with the intentions of stealing her body again. They never learn do they. Sam grabs Paul’s neck as her face peels away revealing a creepy version of BB’s head. Her skins shreds showing robotic bones underneath. In a robotic Sam voice, she asks Paul to come with her. He refuses and she snaps his neck off camera.

If you want to discuss the original plot, as mentioned above leave comments, fine me on Twitter or feel free to email me.