CBS’ The Inspectors viewers were fortunate to get another powerful episode directed by Terry Serpico, who plays Mitch.

As the episode opens, a postal carrier is beaten and left unconscious on the ground while his mail truck is robbed.  Amanda (Jessica Lundy) and Mitch (Terry Serpico) look at the surveillance footage but the suspects are wearing dark clothes.

Meanwhile, Veronica (Erica Marie Sanchez) tells Preston (Bret Green) and Noah (Harrison Knight) that she will be interviewing Kristin Masterantonio (Geffi Maya Hightower), who is trying out to be the first female kicker on the Jamestown University football team.  Veronica is very excited about this important story.

Amanda and Mitch learn that in addition to mail containing checks, medical drugs were also part of the stolen items.  The CDC is notified but fortunately, the vaccines weren’t part of a seriously needed medical shipment. Amanda and Mitch question Wayne Haskell (Isiah Stratton) who reported his truck stolen.  This was the same truck that the suspects used in the robbery.  Haskell’s answers raises Amanda and Mitch’s suspicions but as they don’t have anything on him, they can’t hold him as a suspect. 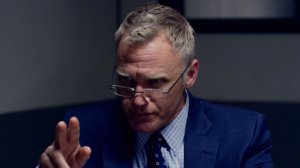 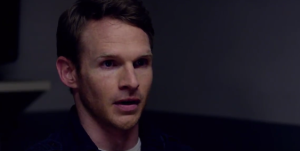 Veronica interviews Kristin and learns that of her football success at her other school. Kristin wants to play at Jamestown to carry on a family tradition.  But due to the university’s bylaws preventing female students from participating in male contact sports, she is denied a position. This discrimination angers Veronica, who wants to go to Dean Foley to get the university to change its mind. Noah also has some resentment about not being chosen as the school mascot, one of the founders wearing a powdered wig. Noah films Veronica questioning Dean Foley but makes the dean uncomfortable as he puts the camera extremely close to the man’s face. Does Dean Foley have something to hide? Noah inquires.  But Dean Foley insists that Kristin can’t be allowed to play on the male football team unless the university bylaws are changed.  This policy was written to protect female students from getting hurt.  So, Preston, Veronica and Noah get involved to change these rules.  Preston appears before the board and presents Kristin’s case to Dean Foley.  The scene is great as Preston basically acts as though he’s Preston Wainwright, Attorney at Law.  This reminds viewers of his passion and commitment to pursue a legal career. 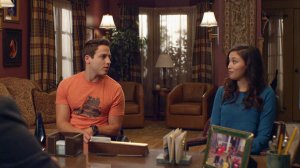 Back to the case, Amanda comes up with an idea to lure the suspects out of hiding.  She gives a statement to the press indicating that the vaccines stolen with the mail were very valuable and that they are offering a $50,000 reward. It turns out that Amanda and Mitch’s suspicions of Wayne Haskell were correct as he is working with Jeremy Willits (Nick Madrick).  They were the ones who robbed the postal truck. Wayne wants Jeremy to turn in the vaccines so they’ll get the reward money, but Jeremy is skeptical.  It could be a trap plus he has priors. Wayne can’t go because he already met with the postal inspectors and they know what he looks like.  Reluctantly, Jeremy brings the vaccines to Amanda and Mitch.  His cover story is that he was walking his dog in the park near his apartment, and the dog found the box with the vaccines.  After Jeremy leaves, Amanda and Mitch discuss his information and decide to set up surveillance around the park and Wayne’s apartment. When they review the footage, Amanda and Mitch don’t see Wayne, his dog or anyone else with a dog coming to the park. However, they spot Wayne Haskell coming to Jeremy’s apartment. Gotcha!  Later, Jeremy looks out the window and tells Wayne that postal inspectors are there to bring him his check. Wayne takes a look and goes to hide in the back room when he sees it is the same postal inspectors he spoke with. Instead of a reward check, Mitch tells Jeremy that they have a search warrant. Wayne is discovered in the back and both men are arrested for the postal truck robbery. And Wayne learns that the vaccines are only valuable if you have allergies! 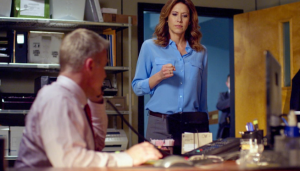 A live announcement is being made by Dean Foley on the Jamestown University news. Veronica, Preston, Noah and Kristin are happy when Dean Foley reveals that Kristin is the first female kicker to be awarded a football scholarship.  As the episode concludes, Preston, Veronica and Noah watch the football game Kristin is playing it.  She kicks a goal. Even though Jamestown loses, they are still a winner for allowing a female kicker on the team. And Noah is the new mascot.

I loved this episode. It had two important themes: a postal truck robbery and a female student playing on an all male football team. Terry Serpico is an asset to The Inspectors as both and actor and a director.