CBS’ The Inspectors episode titled “Dangerous Delivery” reminded viewers that is illegal to send suspicious items via the mail.

The episode opens with Amanda (Jessica Lundy) and Mitch (Terry Serpico) questioning Joselyn Andrews (Erika Page White) about the threatening letter she received in the mail.  If the letter was mailed locally, this will make the postal inspectors’ investigation easier as it will narrow the search.

Veronica has a class related interview but doesn’t have a car to take her there as her parents are in The Carolinas.  She begs Noah and Preston to let her borrow their cars but as Veronica is a new driver, they don’t want to risk her using their cars. Preston (Bret Green) has a therapy session with Grace (Clark Sarullo) who uses a cotton swab to test whether he feels any physical sensation in his body.  Unfortunately, Preston doesn’t feel anything and that frustrates him.  Grace encourages him to remain positive, stating that people recover differently and at their body’s own pace.  Noah (Harrison Knight) enters and notices the attractive Grace.  It’s always so cute to see Noah’s response to a pretty girl. Before Grace leaves, she tells Noah that his car is blocking the mail box making it hard for the postal carrier to deliver the mail.

Georgia (Charmin Lee) tells Amanda that they have been able to determine that the letter was mailed locally. Although she is happy that Amanda is interviewing for possible career advancement positions, Georgia doesn’t want Amanda to leave.  Mitch feels the same, stating that it would be hard to train a new boss and that he would miss Amanda’s nuances.

Someone wearing gloves places what looks like a bomb in a card to sent to Joselyn Andrews.

Veronica finally convinces Preston to allow her to use Noah’s car, which he parked outside while he’s at a film festival. Unfortunately as she’s pulling out, Veronica hits the mailbox and takes off the car door!  She tells Preston they can take it to a body shop and get it repaired without Noah ever knowing. However, they don’t count on the body shop calling Noah to get authorization for the repair. 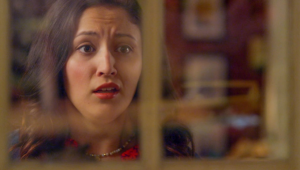 Amanda and Georgia have intercepted the card that was sent to Joselyn. The item inside that appeared to be a bomb was made of clay.  The lead comes when Amanda recognizes the voice of the person who tipped them off as that of Joselyn’s administrative assistant Brenda (Michele Powe).  Amanda questions Brenda about whether Joselyn has any enemies in which Brenda tactfully answers no more than being the boss brings. Georgia is able to get a match to the envelop sent to Joselyn with Brenda’s fingerprints from her water glass.  Brenda is arrested.  Her motive is that Joselyn’s company layoff of Brenda’s father made him leave and separated Brenda’s family.

Preston and Veronica are surprised when Noah returns early from the film festival.  Because Noah notices that his car is not parked out front, Preston and Veronica make up a (not convincing) lie that due to bird poop they took the car to get cleaned. When Noah’s car returns, it is now green instead of yellow.  Noah admits he knew what they did but wanted to watch his friends squirm. However while pulling out, Noah too hits the mail box!