The latest CBS The Inspectors episode titled “Birds Eye View” focused on the illegal transporting of endangered species into the country.

As the episode opens, Amanda and Mitch (Jessica Lundy and Terry Serpico) have the siren on in the car as they are frantically trying to get an injured female to the hospital.  It turns out that the patient they are referring to is a rare bird.  At the vet’s office, Dr. Marsha Wallmac (Sharon Graci) treats the animal and tells the postal inspectors that the bird will recover. At the office, Amanda and Mitch discuss their latest case, which involves the injured bird.  Apparently, someone is illegal transporting endangered species to make a profit. And sadly, they are putting the animals in small cylinders to make them easier to smuggle. 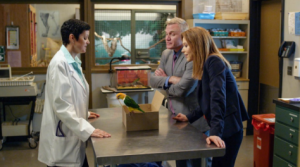 Meanwhile, Veronica (Erica Sanchez) is excited because it is the tenth anniversary of when she, Preston (Bret Green) and Noah (Harrison Knight) buried their time capsule and they will be digging it up. Noah is goofing off, jumping up and down on Preston’s bed when he takes a bad fall.  He later tells Preston and Veronica that he will be confined to a wheelchair for four weeks. Preston offers to give Noah a crash course in Wheelchair 101 and tells Noah that now he will get to know what it’s like to “walk in another man’s shoes.” 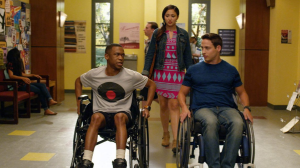 Amanda and Mitch’s investigation leads them to Myron Bell (Paul Tigue), who explains that he purchased the bird and paid for it using an outline payment service.  Myron is a member of an organization that loves and wants to protect birds and had no idea that he was buying the animal from someone who committed a federal crime.  Offering his full cooperation, Myron gives Amanda and Mitch access to his emails regarding the transaction.  The postal inspectors are able to trace the IP Address of the seller, Tony Cahill (Alan Wells). And Preston’s research helps them discover Cahill’s physical address.

Wheelchair 101 lessons begin; class is now in session. Preston shows Noah some basics, including how to reach high objects.  He also instructs on building upper body strength by working out with weights.  Since they couldn’t come to the time capsule, Veronica brings the time capsule to them. Let’s see what their nine year old selves thought they would be in ten years: Veronica wanted to dance on top of the Eiffel Tower and Noah wanted to be an astronaut. The scroll of paper containing Preston’s wish appears to be missing.  Preston continues to work with Noah, who doesn’t feel he needs to know everything because he’ll be out of the wheelchair in four weeks.  Realizing he is being insensitive, Noah apologizes.  Preston understands; besides he may be getting out of the chair soon himself. Preston has an appointment with his doctor to update him on his progress.  However at the doctor’s appointment, he and Amanda are told that Preston’s progress isn’t going the way they’d hope medically and he shouldn’t get his hopes up. Preston is crestfallen and Amanda comforts her son. And later, Noah tells Preston that he’ll there for him no matter how long it takes.

Noah finds Preston’s scroll and smiles when he reads it. Noah and Veronica take a blindfolded Preston to a place that overlooks the city.  After they remove the blindfold, Veronica comments that the building across the way looks like the Eiffel Tower and Noah says that it is the closest to the stars he’ll get, fulfilling his childhood astronaut dream. He then hands Preston the missing scroll of Preston’s childhood wish. “To be with my best friends Noah and Veronica,” Preston reads. Wishes do come true. 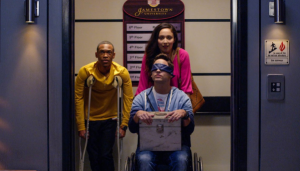 Amanda and Mitch arrive at the home of Tony Cahill as he is returning from his business trip and arrest him.  They hear bird sounds coming from his backpack, giving them all the evidence they need. And when the go back to the animal hospital, Amanda and Mitch learn that the boy bird is in fact a girl. 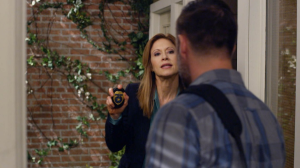