The latest CBS The Inspectors episode titled “It’s Complicated” focused on the dangers of identity theft.

The episode opens with Amanda (Jessica Lundy) and Preston (Bret Green) having breakfast at University Grind. Preston is mapping out a route from Richmond so his mother will have the quickest way to return home for a visit.  Amanda reminds her son that she hasn’t decided on whether she will be taking the job promotion.  Professor Dalton Price (Robert Pralgo) enters and Preston makes a fast exit (and by exit, I mean he leaves the table so Amanda and Dalton can be alone but watches from the window). Dalton invites Amanda to be his date for an upcoming wedding.  Amanda tells him that she can’t give an answer yet as she doesn’t know as she has some stuff going on and doesn’t know where she will be. An understanding Dalton says she can take all the time she needs; the only thing she has to think about for the wedding is whether she likes chicken or fish. 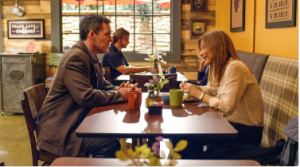 Meanwhile, Preston and Veronica (Erica Sanchez) are holding hands while out for a stroll. Both have smiles on their faces, the picture of a young couple in love. Sadly, it is just Preston’s dream. He fell asleep on the couch, and Veronica had to wake him up. Preston calls his dream a nightmare. Noah (Harrison Knight) reminds him of an appointment they have. When Veronica offers her assistance in helping him up, Preston snaps that he can do it, gets in his wheelchair and leaves. “It looks like someone woke up on the wrong side of the couch,” Noah comments.

Amanda and Mitch (Terry Serpico) are investigating a series of identity thefts and it seems like one of the places hit is the Evergreen Living Center, a retirement home. They question employee Alexis Rollden (Jennifer Swirtz), who says that the center’s computers have been hacked before.

Preston is working in the crime lab with Georgia (Charmin Lee) and he is a little snippy to her, even rolling his eyes. Georgia questions him on his behavior.  Preston admits that it’s making him angry that people seem to think he’s helpless. Georgia tells Preston that he is one of the strongest men she knows. But he thinks that his mother is delaying accepting the job promotion because she thinks he can’t take care of himself. Later, Preston tells Amanda that regardless of what her decision is about the job offer, he’s moving out of the house.While Amanda is investigating the identity theft case, Mitch is working on his own project.  He is having Noah take photographs of the people at the office.

Mitch shows Amanda an online video that shows Lauren unpacking a coffee maker.  Apparently, there are people who love watching videos of people opening boxes. He has also uncovered a connection between Evergreen Living Center’s Alexis and Lauren: They’re sisters-in-law. And when the postal inspectors search the dumpster outside the Day Care Center, the find the shipping box for the designer handbag. 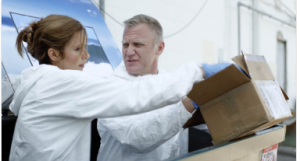 When she returns to her office, Amanda finds a present waiting on her desk. She opens it and is touched by the beautifully put together photo album. Mitch enters with Noah. He praises Noah’s wizardry with a camera. He tells Amanda that regardless of her decision on whether to accept the job offer, he wanted her to have a keepsake of her time there.

Amanda talks with Veronica, who tells her about Preston deciding that he may move to England.  Veronica has noticed Preston’s recent behavior and remarks that it’s almost like he’s trying to push her away. Veronica finally admits to Amanda that she loves Preston.  The postal inspector later questions her son in the interrogation room. She reminds him how she knows when someone is holding back on giving information.  Preston tells her that he doesn’t want her to miss out on a job opportunity because of him. They both agree to do what’s best for themselves.

The identity theft case is solved: Alexis is obtaining the fake credit cards and using the Day Care Center address to ship items. Amanda and Mitch urge Lauren to make it easier on herself and cooperate with them. And later, Amanda finds Alexis out with friends at an expensive restaurant about to charge their meal with one of the identity theft credit cards.

Veronica tells Preston that she doesn’t care if he’s in the wheelchair; she was there for him at the beginning and will be at the end whether he’s in Virginia or England or Rome (which would be cool says Veronica). And with that, Veronica utters those three words we’ve (and Preston) have been waiting to hear “I love you.”

As the episode closes, Amanda is at University Grind thinking about three years ago when her husband Henry said to Preston that it’s always important to tell the people in your life how much you care about them. Dalton arrives and asks her whether she made a decision. Amanda answers yes. But did she just decide about attending the wedding with him or has she decided about the job promotion offer?