In just a few short weeks, CBS’ The Inspectors returns for an all new season. Season 3 of The Inspectors will premiere as part of  the CBS Dream Team lineup on Saturday, September 30.

The Inspectors is one of those rare television shows that entertains as it informs. Wrapped in a tightly written and well acted half hour package, it’s the special delivery from the network that viewers are happy to have received. In watching The Inspectors, we learned how United States Postal Inspectors work to protect us from fraudulent crimes involving the mail.

In Season One of The Inspectors, we meet the characters. Postal Inspectors Amanda Wainwright (Jessica Lundy) and Mitch Ohlmeyer (Terry Serpico) worked to bring perpetrators of crimes involving the mail to justice.  Amanda’s son Preston (Bret Green) is an intern in the crime lab who didn’t let being physically challenged deter him from meeting life’s demands. His friends are Veronica Ruiz (Erica Sanchez) and Noah Waldman (Harrison Knight).  The trio attend Jamestown University.  Veronica wants to pursue a career in journalism and is also a gifted singer, while Noah is interested in film making. At the end of the first season, Preston admitted his feelings for Veronica, who had accepted a summer internship in Italy. Season Two saw Preston and Veronica trying to define their relationship after her return from Italy.  Would being a couple change their friendship if a romance failed?  They were torn (as were viewers). Nonetheless despite a few bumps along the way, Preston and Veronica as friends/a couple endured. 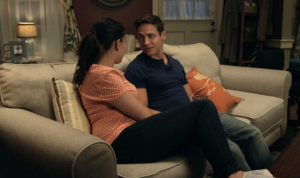 Then we had Noah, who was also torn. He was pursuing love.  That is, love for his passion of film making. The problem pulling him in two directions was that his parents wanted him in what they felt was a more stable profession as an engineer. But during a Declare Your Major event at Jamestown University, Noah made his choice and being a film maker won.

Amanda was offered and considered a promotion but worried about leaving son Preston and her life in D.C. And even if he never admitted it to her, it was obvious that Mitch has feelings for Amanda.

As Season 3 approaches, I look forward to seeing how Amanda’s decision will effect her life and the lives of those around her.  Will Mitch admit his feelings for her or just remain silent? And speaking of Mitch or rather the actor who plays him, I really hope we’ll get more episodes directed by Terry Serpico.  I would also love to see an episode in the new season where Preston discovers a postal crime and works the lead on his own before bringing it to the attention of the postal inspectors. Will he compromise an investigation best left to the trained professionals? Preston, Veronica and Noah’s education at Jamestown University is coming towards its conclusion, how will these young people adapt once they leave the safety of the college environment to tactical the real world?  A fast forward to the future episode would be cool. Would Preston and Veronica be married?  What would their careers be…would Preston be a lawyer or a postal inspector like his mother?  Would Veronica be a journalist or have a singing career? Had Noah made the right choice in pursing film making or did that career path prove to be more difficult than he’d expected? Will Preston ever walk again?

It is my hope that more people will tune into The Inspectors and take away the information it so excellently provides.  This is a show that deserves more exposure.  The Inspectors is like that good book you may not know about but once you discover it, you can’t put it down. It is a dream show so it’s appropriate that it’s part of CBS Dream Team of Saturday morning programming.  I’ll continue to bring you episode recaps here at The Nerdy Girl Express.