The recent outing of Supernatural an episode titled “Mint Condition” has some elements in it that proved enjoyable. Below I offer the things I felt were the best about it.

The opinions offered are that of the writer and not of The Nerdy Girl Express and may differ from those of others. It contains spoilers so if you haven’t seen the episode “Mint Condition,” please do not continue reading.

Actress Genevieve Buechner returned to Supernatural for another guest starring appearance. She previously played Lily Shoemaker in Season One Episode 5 “Bloody Mary,” which ironically re-aired on TNT on the day before “Mint Condition” on October 31 as part of the Supernatural Halloween Marathon and again on November 8 as Season One episodes are repeating on TNT. Buechner’s Samantha wasn’t like most of the women guest characters (First off, she didn’t get killed!). She kept her cool throughout the unbelievable situation of a ghost possessing an action figure. She had great chemistry with Sam (No, not romantic chemistry which doesn’t have to be the only type of chemistry on a show to enjoy) and wasn’t helpless. Sam and Dean are heroes and “saving people, hunting things” is part of the family business, but it’s great when every so often the person they try to protect is capable of saving herself. Genevieve Buechner did a great job. And third time’s the charm, here’s to her return for another Supernatural episode.

3.    The script and directing

Davy Perez wrote “Mint Condition” and the episode was well written and tight with some really good dialogue. As directed by Amyn Kaderali, the pacing with the undercutting between what was happening in reel life with Hatchet Man (Barry Nerling) and real life David Yaeger spirit possessed Hatchet Man made for some funny and exciting moments.  I loved how the security guards were so focused on their movie that they totally missed all the action playing out right under their noses. We also got some similarities between this episode and Season Two Episode 18 “Hollywood Babylon” complete with a Hell Hazer: The Reckoning throwback.

My favorite episodes of Supernatural have always been ones where it’s Sam and Dean versus the bad thing. Monsters, ghosts, vampires, werewolves…I don’t care what it is as long as the Winchester brothers are showing their skill as hunters using what “dad taught us.” That’s why the earlier seasons of the series are and will always be the ones I enjoyed the best. I feel that the longer Supernatural goes on as a show, we are losing some of the elements that made it special. In the early days we had these two brothers fighting evil and risking everything (even their own lives and souls) to protect the world. It’s my hope we get more episodes this season that harkens back to those glory years. 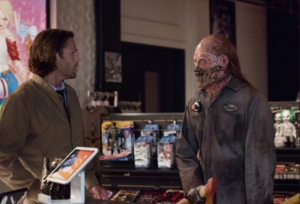 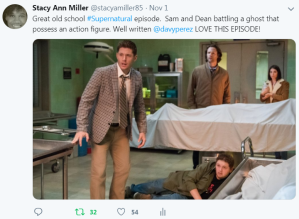 1.   Sam and Dean working together

One of the most noticeable thing missing about the later seasons of Supernatural is what seems to be the interaction between Sam and Dean, especially on cases. In the earlier seasons, the Winchester brothers would drive up in Baby, flash their fake FBI badges and get to work, giving them brotherly bantering and an emotional connection that fostered the “you and me against the world.”  Nowadays, Sam and Dean go their separate ways on investigations and are paired with other partners. Even though they were paired with others (Sam with Samantha; Dean with Dirk) in “Mint Condition” there was no mistaking that the brothers were working together. Plus we got a great Impala moment at the end of the episode. Here’s hoping for more Sam and Dean episodes that showcase the brothers’ teamwork. 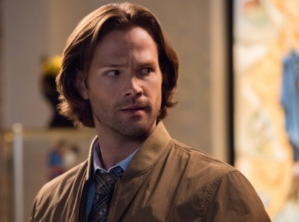