You might be able to tell from all the hashtags that this episode of iZombie had Liv being obsessed with social media. Not that we know anyone like that. *cough*

Why was Liv obsessed with social media? Because of course the brain she ate was, but for once this brain wasn’t part of a murder mystery. Ravi had to find this brain on the fly as our morgue duo found out that the three murder victims of the week were actually headless. Or as Ravi said, “it’s a no-brainer.”

Liv was left in the dark and without any visions to aid Clive, but it seemed they didn’t need any as good ol’ fashion police work did the trick. There were also many more and much more important things going on in this episode that is finally starting to tie all these different story lines together. Good thing too since we only have six episodes left.

First we have Liv and Drake. The two are still seeing each other even though Liv is having major (hah) reservations about him. She is worried about a person who isn’t on any kind of social media, that they are trying to hide something. She has even more when she looks through police records and finds he did almost two years in prison for assaulting a man. Liv is right to worry, she knows he is connected to Blaine, but I don’t know if she knows he’s actually working for him or just getting brains from him. Plus we the audience knows that Drake is getting into some trouble being Blaine’s bouncer/bodyguard and being his mole for Mr. Boss.

Drake confronts her about avoiding him and explains that his rap sheet is because when he was younger he came home to find his mom’s (who had raised him alone and he is very close to) boyfriend had beat her up. He beat him up in retaliation and isn’t sorry for it. Liv seems to find this acceptable and they plan a date that is then ruined when he gets a call. Liv (and I) assumed it was a brush off when he says he has to cancel and go to his mom’s. Liv insists on going and to both of our surprise Drake really does go to his mom’s and fixes her leaky sink. Drake’s mom is hilarious, giving Liv a bad makeover, pestering Drake, her terrible photography and knitting skills as well as commenting in a way only moms can about how blindingly pale Liv is, no matter how much Drake begs her to stop. 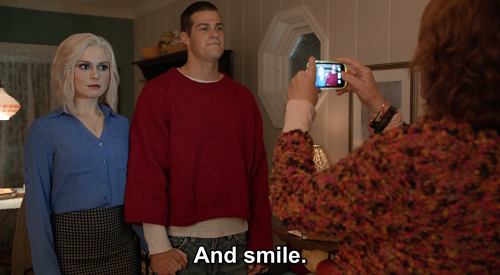 Drake is turning out to be a much more fleshed out character than I had anticipated. I don’t know if the writers mean for him to be a more regular face for iZombie or if they just want to gut punch us again like they did with Lowell. Either way, we and Liv are now emotionally invested with what happens to Drake, so here’s hoping he at least makes it through the season!

We also have Max Rager still around, even though they have been more in the background so far this season. This episode we found Vaughn obsessing over people complaining about Max Rager via social media. His turtle ass comment made me laugh the most. He and Gilda also put the screws to Major as they call him out on not murdering Baracus, the prosecutor for Seattle who happens to be a zombie too. Major says he couldn’t because he had a kid, but Vaughn doesn’t buy it. He makes him pick out one of the ‘haters’ on social media and has him murdered to show he means business, as well as threatening Liv’s life again. Does Major finally break down and tell Liv what kind of trouble she’s in? Nope, instead he just lets it sit. For as many people I saw complaining about Liv not telling the truth last season, it’s amazing to me how many are trying to defend Major now.

Poor Ravi doesn’t get much screen time this episode, but what he does packs a punch and a hangover. Not only commenting on Liv’s social media brains, he also tries to keep up with a nightly ‘let’s get drunk’ Peyton (which he fails at and Liv tells him he is a disgrace to his countrymen). I don’t think those two are getting back together yet, but it’s nice to see them be real friends again.

Peyton is having a hard time of it, being put in charge of the Mr. Boss case after Baracus disappears and his threats weigh heavy on her. She is also still feeling guilty for sleeping with Blaine and we get an awesome break up scene where he finds out that Liv and Peyton are besties. I don’t know where their relationship will go now. Blaine still wants Mr. Boss taken down, but he will probably want to retaliate against this too. Maybe turn Peyton into a zombie later? Or worse and that’s if Mr. Boss doesn’t get a hold of her. I fear for our dear Peyton, readers.

Talking about people liable to get killed off, I’m betting our lovely Dale Bozzio might also be on the list. She and Clive are making headway to figuring out their cases against both Mr. Boss and Blaine. Clive and Dale keep getting closer and I love their scenes together. There is no way Clive is leaving the show, so that leaves Dale to take the fall and it would make our resident detective even more determined to take everyone down involved.

During the case, Liv finds out that Baracus is also a zombie in hiding. She doesn’t tell on him and instead gives him some brains. Before the two of them figure out what to do though, Major is on the scene after his skulking around and warnings from Max Rager. He explains how he doesn’t kill any of the zombies, but instead frames it to be and puts them in the freezers. Baracus seems to agree to this and goes down without a fight. He does write an apparent suicide note telling his son, ‘he’ll see him again soon.’ Major takes a picture of the knocked out Baracus and sends it to Max Rager hoping it will convince them he is doing his job.

Everything is slowly coming together and with a half dozen episodes left we will need them to tie all these threads together. I give this episode 👓👓👓. This second season has been outstanding and I can’t wait to see how it all goes down. Make sure to watch next week, Tuesday on the CW at 9:00PM/ET. Here is an extended sneak peek of next week’s episode, ‘The Whopper.’