iZombie has a way of continually surprising its fans in a way that never gets old. Stellar writing has that side effect. The latest episode, Eternal Sunshine of the Caffeinated Mind, does this several times over and it is a great episode to leave off while the CW decided to have yet another hiatus.

Changing up the murder of the week, this time the show starts with Ravi at a coffee shop, flirting with the cashier. The owner, Leslie, is unfailingly positive and she goes outside only to have a falling AC unit kill her. Ravi is there to not only see it, but confirm that it was an accident.

Once Liv and Clive are on the scene, they of course find that the screws to keep the unit in the upstairs window were missing – not an accident after all. They then go on to find several suspects. All of which were hilarious in their own ways. They find Pam (Liv’s old cell mate from when she went to jail) in the shower high. She is still yelling about the system and also more than likely stole money out of the coffee shops till, but remains stubborn that she loved Leslie and would never do anything to harm her. There is also her ex-husband. He owns a rival coffee shop that is the exact opposite in mannerisms and so even though their coffee is just as good, they’re second in Seattle’s popularity.

After eating Leslie’s brains, Liv becomes positively positive herself. When Ravi wants to go talk to the coffee shop girl again, Liv urges him to and says that he can’t fail and that they’re obviously soulmates. She also says that girl would be lucky to have Ravi because he’s perfect. When she tells Clive that it’s a beautiful morning and he mentions it’s raining, she says, “That’s just liquid sunshine my friend!” She even lets Drake off the hook when he has to cancel plans with her again and sends him heart emojis (which he loves).

While Liv and Clive figure out their case we find the other characters just as busy. Ravi back at the morgue is trying to find a cure for zombies since they have finally found some tainted utopium to work with again. Major is very in his face about it, but Ravi insists on testing his cure on the rats again first. Major is becoming very antsy about his time running out and the fact he’s going to turn into a zombie again. He even says ‘no offense’ to Liv about it who says she takes a little offense and I don’t blame her. I forgive Major’s rudeness for something he does later in the episode.

We find out it was a very good idea to test the rats first because Major and Ravi soon find out that Hope has turned psycho zombie rat on them. It’s a gruesome and awesome sight to behold and it puts them all right back at square one for the cure.

We also have a huge reveal with Drake. An awesome one as I have been hoping that he is somehow a good guy. The cops show up and arrest a bunch of Drake’s ‘coworkers’ and they see him run off. He is caught too, but we soon learn that this is all a ruse. Drake is actually an undercover cop! Not only that but he didn’t even kill that suspect Terrell from last week. Hallelujah! We also have a lovely treat of Enrico Colantoni (of Veronica Mars fame) as one of the cops talking to Drake. It’s fun to watch him hit Drake across the face to ‘preserve’ his cover only to hurt his hand (as they don’t know he’s a zombie of course which just adds another layer of secrets to Drake). He also insists that Drake break up with Liv, Drake refuses flat out and says shes the only good thing in his life. I might have aww’ed, out loud. 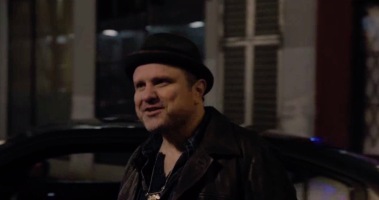 All this reveals so much more plot that is going on. Would Clive recognize Drake? What if these cops find out about zombies? If Clive and Dale find out, they may keep it a secret because of their friendship with Liv and reassurances from Ravi. These guys don’t have that. This also means there is so much more danger to Blaine and even Mr. Boss that they have no clue about. Does Peyton know about this? Hopefully we’ll find out soon.

We soon find out the real murderers of Leslie are actually her daughter and her boyfriend who pretended to be French. She hated her mothers turned around attitude and how she always forgave her employees and gave them everything when she thought she should have been given more instead. She ends up being very cold and calculating as we find out she manipulated her boyfriend into pushing the AC so they could be together. She does it again when she gets to him before Clive or Liv and gets him to say it was only him and she had nothing to do with it. She ends up selling the coffee shop to her mothers ex and leaves for Paris to go to art school and leaves everyone behind. Ouch.

You would think that was enough for one episode, but iZombie wasn’t done yet. There was still two more surprises. First was with Blaine. The entire episode we had signs that something was different. All of Blaine’s wine tasted off and he felt funny. He does his makeup artist and while singing and playing his piano is suddenly kidnapped by Mr. Boss and his cronies. While he is usually able to strike a deal, charm or murder his way out of situations he isn’t able to do any of those this time. They take him out into the woods where a grave has already been dug and slit his throat! It was a very surprising and exciting sequence, but what came next was even better.

It’s the next day and not only does Don E find the makeup artist suddenly eating brains and with a white streak in her hair, but we see Blaine dig himself out of his grave! He stumbles towards a girl scout troop nature watching and steals one of their blankets as he walks on. I think they were very lucky he didn’t decide to have some girl scout cookie brains. I think with the obvious turn of the makeup artist that this means Blaine’s time was up in more ways than one. He’s a zombie again and he will be seething that Mr. Boss got the upper hand on him. 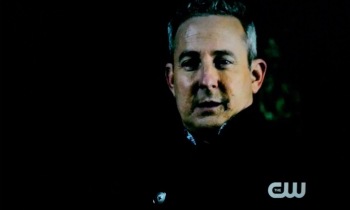 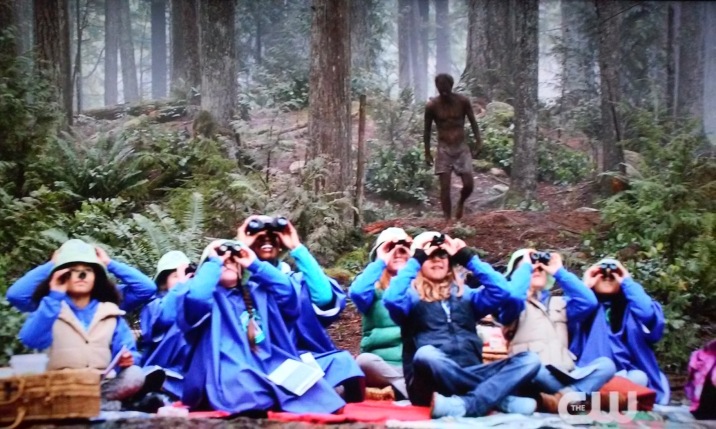 There was still one last surprise this episode. Back at Liv’s apartment, there’s a knock on the door and it’s Major. I’m guessing after seeing the failed rat experiment he is getting beyond nervous and decides to come clean to Liv about his secrets. Sadly we don’t get to see this much needed moment because Gilda comes in. It’s a great moment to see the two staring at each other while Liv obliviously says she can’t believe it took them this long to meet. Major doesn’t say anything, but as he’s leaving instead of saying goodbye to Gilda, he say’s Rita. I was unsure if this was on purpose or not, but Rob Thomas himself confirmed it for me in one of my live tweets. Major definitely meant to tell Liv at least that much of the truth!

Liv does put it together and I was very surprised she didn’t go full on zombie on Gilda, maybe she still had a bit of those positive brains in her system. She still yells at her, punches her in the face in the best moment yet on this show and tells Gilda that she will burn anything of hers left in the apartment that’s not gone in an hour. It was badass!

Of course this shifts a lot of things around. While Liv still has no idea about the Max Rager connection of it all, she knows this was the ‘other’ woman in Major’s life. Will their relationship be at all repaired by this? Also Gilda won’t be happy that Liv punched her, I can see her being the kind of person that is vindictive. Not to mention this may put Liv up higher on Max Rager’s hit list. Will Major finally tell the entire truth to Liv and they will take down Max Rager once and for all?

This was an almost perfect episode of iZombie and I am so sad that we are on another hiatus. Still this will only make its return more sweet and I can’t wait to see how this all unfolds. iZombie returns March 22 with an all new episode, He Blinded Me with Science. Here is a preview to tide you over until then!

Also a big thank you to @_jonathanwhite_ for most of these amazing pics! Make sure to follow him on twitter for more of those and his #iZombieSupportGroup, plus other awesome zombieisms!

Make sure to subscribe to our site to never miss another article and give us a follow on twitter, @TheNerdyGirlExp. I’m also on there and would love if you followed me, @quietlikeastorm.

One thought on “A Positively Positive #iZombie Review”