Once again Gotham delivers a great episode! Beware spoilers ahead! Last night focused on two of my favorite Batman characters: The Riddler a.k.a Edward Nygma and Penguin a.k.a Oswald Cobblepot. There is a lot of back and forth scenes that give a little bit of Nygma and a little bit of Oswald. We first see Nygma sneaking around an art gallery. Quite the riddle indeed! He ends up causing a distraction by setting off a fake bomb and proceeds to deface some paintings with his iconic green question mark. These question marks lead Detective Gordon and Detective Bullock to the Gotham City Central Station railway. There they discover another question mark on a locker which happens to contain a bomb. Jim grabs a crowbar to get to the bomb and disposes of it where it won’t hurt anyone. There we see Nygma creeping in the background. What’s he up to I wonder? After the chaos has died down, we see Nygma go up to a policeman and ask him to sign a paper for chain of custody. Hiding in plain sight is the best way to hide sometimes! 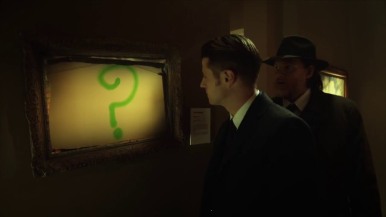 Next we see Oswald paying a visit to Butch. Being the reformed man that he is, he wants to apologize to Butch about the things that Oswald put him through. He even brings him cupcakes! How can you stay mad at a man who has cupcakes! Tabitha isn’t believing a second of it since she thinks he killed her brother. So she tries to egg him on by talking ill about his dearly departed mother. But Penguin doesn’t take the bait. He really is a changed man. Butch almost feels sorry for him so he lets him live, but not before Tabitha demands some kind of punishment.

For a quick snippet we get to see Bruce and Selina again. This time they go to visit Ivy, who is creepily tending mushrooms. Apparently she works for Sunny Gilzene’s gang who sell magic mushrooms. They plan to steal the money from the drug dealers and Bruce has no problem with this since they are criminals. I think he’s feeling a little bit like Robin Hood right now. They unfortunately get caught and Sunny is going to teach Selina a lesson. Bruce intercedes though and takes one hell of a beating. But just before he gives up, he hears Alfred’s words about taking down a big guy. You just have to outlast him. He does, and Selina jumps in to help him out! They get away! WOOHOO!

Penguin feeling all alone now, goes to seek comfort by visiting his mother’s grave. There he meets a man who says he knew her a long time ago and only recently found her again after her death. It turns out that this man is none other than Oswald’s father! That’s right, drop the mic! His father, played by the iconic Paul Reubans! Yeah, Pee-Wee Herman y’all! What I love though, if you remember the 1992 Batman Returns movie, Paul Reubans played Oswald Cobblepot’s father then. Though not so inviting in that movie as he is in this episode. Penguin’s father takes him back to his home and immediately makes him a part of his family. It looks as though he has a wife and two children, who I’m not sure are even his. This could pose a problem since Oswald’s father is obviously a wealthy man. I’m not sure I trust any of these people yet including his father. Seems fishy to me!

Later on, Captain Barnes confronts Gordon and lets him know that IA is reopening the investigation of the death of Theo Gallivan. Apparently there was an eye witness that saw Jim shoot Gallivan in the chest. This of course has Gordon freaking out. Later on we see Edward show up and kill the cop that signed that chain of custody form. I’m starting to see where this riddle is heading. Harvey calls Jim and tells him that the bomb was activated remotely and gives him the address of a payphone where the call was made. Jim decides to investigate since he can’t sleep anyway. Stressing about the IA investigation I’m sure. When he shows up, he notices the door next to the payphone is open and being a cop, he decides to be snoopy! He discovers the cop dead and just before he can radio it in, he’s interrupted by none other than Captain Barnes. Jim’s taken back to the station, and is shown a mountain of evidence against him. The cop was killed with a crowbar that has Jim’s prints on it and apparently that signature was on a witness statement form, not a chain of custody form. It’s looking like Jim isn’t going to be able to figure his way out of this one.

Jim is subsequently convicted of murdering the police officer and is taken to the infamous Blackgate Prison. Bad time to be a former cop I think! He’s able to say a final goodbye to Lee and he tells her to move on. Go somewhere safe and take care of their child. So heartbreaking; I hope he figures a way out! On his way to Blackgate, Harvey tells him that he is going to find out who did this. Partners until the end!

The final snippet of the episode was very interesting and a definite cliffhanger! We see Barbara lying where she’s been ever since her terrible fall. In the background we can hear the news broadcasting the outcome of Jim Gordon’s trial and that he was sentenced to 40 years in Blackgate Prison. Suddenly Barbara comes out of her coma. Is she still so in love with Jim that this would bring her out of unconsciousness? It would seem so!

Watched the episode? Leave your thoughts in the comments! Or you can tweet me @luckynerdgirl on twitter! Follow @thenerdygirlexp for more Gotham and other nerdy news! Watch @Gotham on Fox Mondays!