Catch up on episode three of A&E’s newest horror drama, Damien. Spoilers below!

I was very happy to see Damien not only use his skills as a war photographer this episode, but also being proactive. It had been a complaint of mine that he was mostly reactive to the things and people going on around him, but now with Ann Rutledge moving in Damien finally wants some answers of his own.

He tails Ann to a large corporation and while he waits outside for her to come out again we see that Ann’s assistant is tailing Damien. She calls it into her boss and continues to watch him from afar. I hope we see a lot more of this character as a good supporting cast helps to make a great show.

Ann is having problems of her own as we see her being ousted from the company. They don’t like how she’s playing this cat and mouse game with Damien. They need him on their side and they need it now. Making the plot even more interesting with the ‘evil satanic organization’ is that its leader seems to be none other than John. The man Damien had went to go see and has known since he was a child. The man played off the loving uncle to Damien without revealing his true intentions while warning him away from Ann. We see why now as he names another  man in charge of kick starting Damien into apocalypse mode. 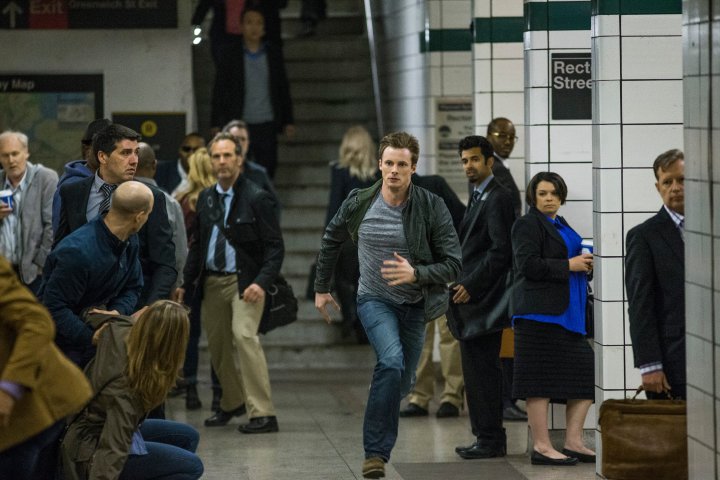 This is where Ann gets diabolical as she knows from her assistant that Damien is outside watching for her and she uses that knowledge. Her and new guy are talking about Damien and she tells him that Damien is attracted to violence, pain, death and very young girls. That squicked me out a little, not going to lie and I’m sure it was intentional, but it makes more sense as he saw a little girl when his would be assassin tried to kill him. She uses that as a catalyst to freak out her competitor and then acts like he shoved her down. She calls for help like a damsel in distress that she certainly is not.

That made me go ‘OH’ because I realized that not only did Ann know how to play to Damien’s secret want of strife, but she knew the man in him wouldn’t stand for someone mistreating another. She used the good in Damien for her own evil purposes. It floored me a bit and serious kudos to you Mr. Mazzara for writing that in.

Damien plays into Ann’s plot exactly the way she suspected he would and chases after the man. The man knowing this is the beast runs for his life. They go down into the subway where the man pushes people out of his way. One is a little boy who goes over onto the train tracks. Damien realizes a train is coming and heroically leaps down and climbs back up with the boy in the nick of time, saving him.

Not that this allows the man to get away. The dark forces surrounding Damien that he has yet to fully realize or control take care of him by making sure he trips on the escalator, panics when his tie gets caught and meets quite the grisly end.

Meanwhile we also have the newly introduced detective Shay looking into Damien’s past. He sees that there are several unexplained deaths around him and he just knows that Damien is the cause of them somehow. I’m not sure why he had such a hard on hate for Damien on first sight as a few of those deaths are far fetched for Damien to orchestrate. The sinkhole Kelly was killed in, random dogs mauling a man to death when Damien wasn’t even around. Suspicious, yes. Likely? No. Another cop confirms that when he tells Shay that Damien is a regular eagle scout saving the kid from the subway. Shay still isn’t buying it though.

We also have an interesting turn as Simone sees a statue at a church start to bleed. Is she being haunted by her dead sister? It would seem something is trying to warn her. We also get more of her and Amani together trying to figure out what Kelly had been researching before her death. They find out the professor was also killed in strange circumstances the night she went to go see him. It’s ominous, but otherwise left alone for another episode.

The final scene was the best of the episode. Damien is in his apartment when none other than Ann comes to visit. Damien is still extremely wary of her, but he lets her in. She seems to be the only one that understands about the dark cloud that follows him around, even if he doesn’t like her answers. They have another strange, but erotically charged talk. Seriously are those two going to bang? It’s so weird, I kind of love it while it also gives me the heeby-geebys.

Bradley James gives a sensational performance of Damien talking about a village being attacked and watching as the enemy made a woman go through the pain of labor just to throw her baby in the fire as soon as it was born. It’s an horrific story and James is able to convey that horror and tragedy with how it did not give him a devil boner in the least like Ann suggests.

The story seems to shake Ann as well who excuses herself to the bathroom. She then proceeds to self harm her thigh by cutting a 666 into it. It was already there, but she reopens that scar. Ann has some serious issues.

Damien knows there is more that is going on that he doesn’t know. I really like the back and forth of him in denial and when Ann comes out of the bathroom he lets her see his 666 birthmark. He doesn’t like her, but she is the only one that seems to understand that something is going on. He just doesn’t want to accept her answers yet.

Ann leaves after that and promptly orgasms outside his door. Because she fly’s her freak flag like that. Was it because she was so close to the Antichrist? Because she finally saw his birthmark? Because Damien trusted her with that information finally? Because Bradley James is seriously too good looking? I’m not sure, but I’m suspecting all of the above.

Out of all the horror that has been seen on the show so far, that freaked me out the most. Ann Rutledge is one scary character and I can’t wait to see how her story plays out. Barbara Hershey plays the character so well that I think I would avoid her in real life, just in case.

Watch out for my review of last weeks episode that will be out later today. Yes I know I’m a week behind. I was sick, I’m very sorry. I’m hoping these articles will help boost interest in Damien and help with it’s ratings that are sinfully too low still. I really do not understand how people don’t like this intriguing story. I guess no story with lots of gore is still in instead of having to think about it and realize how dark people can be on the inside, even yourself. Sigh.

Damien comes on 10:00PM/ET on A&E, make sure to watch. I will be live tweeting it along with @kleffnotes for our weekly #DevilsNight, so please join us! You can find me @quietlikeastorm. Also subscribe here to never miss out on another Damien article and follow us on twitter @TheNerdyGirlExp.