There might not have been a new episode of Preacher on last night, but fans of the show still got something to enjoy. A Southern styled Chris Hardwick hosted Talking Preacher after a rebroadcast of the pilot episode with guests Dominic Cooper, Seth Rogan, Evan Goldberg, and Sam Catlin. They discussed some plot points, characters, and a couple interesting marketing ideas.

Besides Mr. Hardwick surprising me with his bearded face, he looked great so kudos on the Southern flair, we also got to hear Dominic Cooper chat in his real life voice. I knew he wasn’t actually from Texas, but I hadn’t actually heard him without some version of an American accent. What was fun about watching Talking Preacher was that even though everyone wanted to talk about the show they all had to stay pretty hush hush. While you might think this would be irritating it was actually humorous to watch everyone double checking to see if they could actually talk about the things Chris was asking questions about. The spoiler free couch, that’s what I was calling them during the show, revealed that we will learn more about Jesse’s father and the past that he has with Tulip. Cassidy also has people constantly trying to kill him, though they didn’t give us an official name for whatever group might be hunting him down. 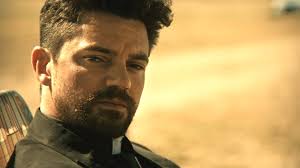 The show, while based on the comics, is more of a prequel than a straight adaptation for those of you who haven’t read or are interested in reading the source material. Rogan mentioned that they really wanted to actually have the preacher in Preacher be seen preaching. One of the fun things we learned about was that the intro sequence was inspired by bad 1960’s sci-fi. They had actually debated about filming it with balls on strings, but found out it was cheaper to hire someone to make it digitally. Tulip and Cassidy also got much larger introductions than they did in the comics, which is amazing because I am loving their characters. Eugene, aka Arseface, is played a bit differently than they originally expected. They decided to make him less of a broad character and I am really looking forward to seeing his development, especially since everyone on the show was so excited about him.

During the episode they brought a fan up to ask all the guests a question and for asking the question he got a version of Tulip’s bazooka and a replica heart from the heart cutting out scene. The entire audience also got a Preacher cup, which looks so cool. Seriously I want one of those bazookas. Anyone have a spare somewhere? There was also a joking mention of making Arseface bandannas for Comic Con. That would be hilarious! Especially if it looked totally normal until you folded it over and then suddenly it’s a butt hole. I’d totally buy one if they decide to make one.

Talking Preacher will only air one more time during this season. They decided to have one focused on the premiere and then it will air again on the night of the finale. I’m really looking forward to it, especially because this show is off to an amazing start.

Share your Preacher thoughts with us in the comments or on Twitter, @thenerdygirlexp. You can also find me on Twitter, @kleffnotes, on my blog, kleffnotes.wordpress.com, my kleffnotes YouTube channel, I run The Nerdy Girl Express Snapchat, thenerdygirlexp, post recipes on the iZombie Support Group site.