The thing about Booth and Brennan (Emily Deschanel, David Boreanaz) that make them such a great couple is that even though they are very different, it doesn’t take away from them as a couple.  It makes them more endearing.

Take for example their difference of opinion when it comes to spring cleaning. Brennan believes that things are just objects that can be tossed if not being used every day. Except for Brennan’s multitudes of books.  She refuses to part with them. “You don’t get rid of books, Booth. That’s crazy.” Brennan does believe that Booth can get rid of his box of socks.  “I wear these socks. I actually put them on my feet.” Booth also refuses to part with his beer hat. Their debate is tabled when a headless body is found in the Anacostia River.

There was no ID so the Jeffersonian Team can’t determine the identity of the victim and without a head, facial reconstruction by Angela (Michaela Conlin) is impossible as well.  A video on social media on a body found in the Anacostia River by two guys out fishing who accidently cut the head off with the propeller of their boat explains what happened to the head.

Booth recognizes the injuries sustained on the body and helps to identify the victim as Seth Lang, a seven-time all-star hockey player.

The investigation reveals that the team’s owner, Jerry Stober died a year ago and his trophy wife Katie (Brooke Lyons) has taken over. Katie suggests Booth question head coach Jeremy Roenick, the hockey legend. Roenick tells Booth that Seth Lang had some issues with his enforcer, a man named Drew Poppleton (Lou Ferringo, Jr.).  Poppleton is questioned and then is off to equipment manager Daryl Patterson (Colby French), who it turns out Booth knows from high school. In fact, Booth helped his high school hockey team score the winning goal to win the championship which Daryl stills obsesses over to this day.

Daryl says he’ll tell Booth where he was at the time of Lang’s murder only if Booth gives him a rematch. Or he could be arrested for impeding an FBI investigation, Aubry (John Boyd) reminds.

Back at Squint Central aka The Jeffersonian, boys will be boys as Hodgins (TJ Thyne) and Dr. Oliver Wells (Brian Klugman) are in a battle to prove who the superior gamer is. When Wells beats him, Hodgins accuses him of cheating and demands a rematch.  Men are like big boys and sore losers!  Hodgins gets his chance when Cam (Tamara Taylor) tells them to find the head so Hodgins gets two drones for he and Wells. It’s so on!  Cam’s reminds “Guys, this is not a drone-measuring contest.” But of course, that falls on deaf ears.

Hodgins and Wells are hard at work playing with their drones, ah, searching the Anacostia River for the head. Oliver’s off-handed butt remark gives Hodgins an idea: Could the head be in the river’s abutment?  Sure enough, Oliver locates the head but Hodgins’ drone intercepts it. So Hodgins declares himself the winner in their little bet. But as Hodgins’ drone is flying the head back to The Jeffersonian, civilians on the ground spot it and the FBI is immediately called. 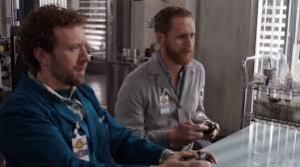 The head finally arrives back at the lab.  But not before Hodgins does a little ‘drone victory dance’ with it. I missed this Hodgins, the sarcastic and nasty Hodgins left a lot to be desired- even though his injury made him justified.  Anyway, Aubry arrives at the lab and tells the guys to pretend he gave them a stern talking to.  But the conversation shifts towards gaming when Aubry spots the drone. Apparently, Aubry is a top gamer, even better than Hodgins and Wells.

Booth learns that Daryl was making money off of eBAY selling Seth Lang’s hockey memorabilla.  So, he becomes a suspects.  Daryl tells him that Lang gave him the stuff to sell because Katie was make budget cuts to the team and workers’ salaries by fifteen percent.  Katie was trying to make the team losers so she could move them to a bigger market. This gives her a motive for wanting Seth Lang dead and officially makes her a suspect.

Another suspect enters the mix. A woman is spotted in a lot of photos with members of the team including Lang.  She is Alex Conrad, (Vedette Lim) a dubbed “hockey groupie.” Alex is four months pregnant but won’t reveal the identity of the baby’s father.

Examination of Seth Lang’s head reveals that he died from injuries sustained to it by a hockey stick and not the cold tub as the team originally thought.

Drew is revealed to be the murderer and father of Alex’s baby.  His reason- Alex was supplying hockey team members with drugs to help with their pain management and Seth Lang threatened to turn her in.  “I didn’t want my kid to grow up with a mother behind bars.” I guess now the baby will have a father behind bars. Or unless Alex is arrested for drug dealing and it’ll be both parents.  But we’ll never know.

Booth gives Daryl his rematch and misses the shot on purpose so Daryl can move on with his life. 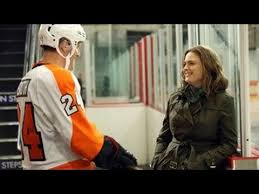 And the final results of Brennan and Booth’s spring cleaning : Three books are thrown out and a few pairs of socks. Oh well, there’s always next year.