The latest Bones episode “The Stiff in The Cliff” did what Bones does best, incorporate the murder case with the human emotion of the characters, touching on the relationships between family and friends.

Booth (David Boreanaz) finds Brennan (Emily Deschanel) and Christine (Sunnie Pelant) watching a news report about the body of famous explorer Henry Charles being found. Charles had disappeared under mysterious circumstances 15 years ago in Alaska. Booth doesn’t think it appropriate for Christine to be watching this, especially when the news further discusses Frank Party and cannibalism. “What’s cannibalized?” Christine asks. “Sweetheart it’s just when people eat other people,” Brennan answers. First grade is too young to hear stuff like this in first grade, she can at least wait until she gets in middle school says Booth.

The Jeffersonian team is ready to determine how Henry Charles died.  The preliminary findings indicate that Henry didn’t die from hypothermia but from blunt force trauma to the skull.  When Dr. Clark Edison (Eugene Byrd) reveals that as a college intern he was a part of Charles’ last expedition, Brennan orders him to step away from the body “You are now one of the suspects,” Temperance says.

With Edison now unable to assist, Dr. Wendell Bray (Michael Terry Grant) takes over as squint. Angela (Michaela Conlin), Booth and Aubry (John Boyd) refuse to believe that Clark could be a murderer.  But when Booth and Aubry arrive at Clark’s to question him, Edison refuses to cooperate without a warrant or his lawyer present. The coffee and donuts they brought doesn’t make Clark any more cooperative.

So, Booth and Aubry begin focusing on the other suspects, the rest of the members of the expedition: Lead archaeologist Marcus Eldridge (John Shea), Hazel Mitchell (Brigett Newton), a teaching assistant and Henry Clark’s guide Declan Marshall (Jim Pirri).

Booth and Brennan go to the university to question Eldridge, who is now a best-selling author due to the Frank Party archaeological discovery.  Even though Marcus Eldridge’s achieved success would have gone to Henry Charles, Eldridge insists that Henry was his friend and would have probably paid for more expeditions so there would have been no reason to kill him. 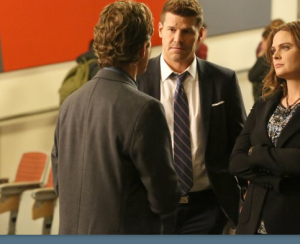 It’s next on to Hazel.  She can be placed on the icy ridge with Henry on the day he died.  Declan wanted to fly away from the area to avoid an upcoming storm and contacted helicopter pilot Alice Tuuq (Kimberly Guerrero), which means there is another possible suspect. Alice had once been arrested for protesting Henry Clark’s company’s plan to have a mining operation on scared Native American land so they certainly had a negative past. She says she recalls someone going inside the Frank Party hut with Henry Clark and they two of them were arguing.

The hut is now on exhibit at the Jeffersonian and Hodgins and Aubry go to search it for blood.  But since Hodgins’ wheelchair can’t fit inside the hut, Aubry has to do it and insists he is capable of checking the hut. “Hodgins it’s a flashlight, it’s not rocket science,” Aubry says. He discovers blood in the hut so it looks like they’ve found their scene of the crime.

Cam’s sister Felicia (Raney Branch) is in town to help her with the wedding. Although this is not the best time with the Henry Charles’ investigation, Cam decides to take the time off from work to go with Felicia to shop for wedding dresses. At the bridal shop, Felicia has set aside dresses she believes are perfect for Cami not knowing that her sister loves the fancy princess-like dress with the puffy sleeves. 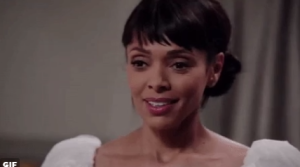 Hodgins convinces Cam to tell her sister how she really feels about the wedding. “If Angela and I have learned anything from my being in this chair, it’s that a person can’t possibly know what you’re thinking unless you tell them.” So, Cam tells Felicia she wants the big wedding, princess dress and personalized candy bars.  Felicia seems to be okay with Cam’s decision.

The investigation into Henry’s murder reveals that he was punched in the head by someone who wasn’t wearing gloves. A test of the knuckle pattern of all the suspects rules everyone out but Clark who didn’t take the test and now appears to be their only suspect.

With his lawyer present, Clark finally answers Booth’s questions.  He admits to punching Henry after finding him with Hazel (who Clark was in live with at the time) and also how he falsified information when Hazel accidentally nicked the C4 vertebrae of one of the bodies. Brennan prefers to remain objective, but Clark wants Brennan to prove that he didn’t kill Henry Clark “We’ve worked together for nearly a decade.  If there’s anyone who could prove my innocence, it’s you.” So, Temperance agrees to give the evidence another once over.

The blurry photo in Eldridge’s book of the findings help Brennan to determine that he faked the cannibalism and it is later revealed that Hazel killed Henry Charles with an ax containing a fragment of C4 vertebrae. Her motive was that Henry was going to tell what Eldridge did and because Hazel’s career rested on Marcus Eldridge’s reputation, she couldn’t let that happen and all her hard work go to waste. 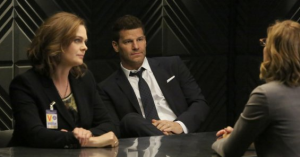 Clark has decided to resign from the Jefferson but Brennan reminds that even though he made a mistake by falsifying evidence, he did so before he became a forensic anthropologist and mistakes help make better scientists.

When Booth learns that Eldridge is receiving a large sum of money to write about Henry Charles, Booth wants to write about Brennan so he could get the money he needs to but something he’s always wanted- an ice rink for the backyard.