This week’s episode of Preacher opened with a return to Ratwater, you know that place in 1881 with all the dead bodies and the lone cowboy. He’s made the long journey for some sort of medication, but while he wants to leave as soon as possible, the pharmacist insists he needs to wait until morning. Now I can’t tell you everything here, keep reading for the rest of the recap.

The cowboy makes his way into the bar and sees a man with a bag full of scalps, probably from the bodies in the tree. He gets a free bottle of whiskey, but doesn’t drink it. Then he winds up meeting a preacher, who sounds an awful lot like Jesse, and seeing a great deal of depraved bar behavior. The family in the wagon he met before he made it to Ratwater is now on their way there. Even though he has the medicine he turns back and races to the town after the family. He tears open their wagon and finds a dog licking up blood out of the back. The cowboy tries to confront them and is beaten by the crowd around them. Thankfully he is able to protect the medicine from their blows. The preacher here finally talks to him and reveals that he knew him from Gettysburg. Before he can leave this preach shoots his horse, forcing the cowboy to make the journey home by foot. By the time he returns he’s too late and both his wife and child are dead. He drops the medicine to the ground and begins arming himself, this cannot be good for the town of Ratwater.

In present day Annville the sheriff is checking outside his house in the middle of the night. Eugene asks him if it was the lunatic, but his father just tells him to go to bed. In Eugene’s room there is graffiti that says finish the job and an arrow is drawn toward a shotgun in the corner of his room. Whoever they heard outside made their way in while both men were outside. Emily and Jesse are meeting the next day to talk about church matters and she thinks it’s weird that Odin was at Sunday service and that the slaughterhouse owner was behaving strangely. Jesse is suddenly very in demand with the locals, including some very religious teens who are ranking the gospels.

We move from the diner to Tulip’s and while Cassidy is recovery she starts asking him every question she can think of. With her quick interview we get to learn some facts all about how vampires work in this universe. Before he leaves Cassidy asks if she knows where he can get some opiates, that’s a no, and where a hardware store is. He then tells her that he’s fallen for her and she says she’s got a boyfriend. Yep, it’s totally Jesse. Cassidy also briefly gets to learn about Carlos and how Tulip plans to castrate him and then stab him with a screwdriver. He tells Tulip that maybe her boyfriend isn’t really the man she thought he was anymore if he doesn’t want to help her.

Donnie is avoiding going to work, he’s apparently been pretending to be sick for a few days. His wife tells him that he needs to go back in because he’s Odin’s right hand man and then tells him if he doesn’t go to work she’s going to screw an accountant who has a thing for her. Their relationship is definitely an odd one. In the hotel of the gentlemen, Fiore and DeBlanc are rehearsing what to say on the phone to Heaven. Fiore will be handling the call because he’s apparently the sweet one, but DeBlanc is making sure he doesn’t mess it up. 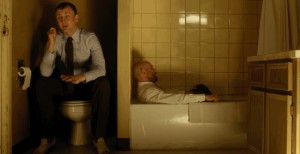 Emily is at Jesse’s house picking up the collection money and while she’s going to the bathroom Tulip appears. She asks her where Jesse is and after she finds out Tulip closes the door and leaves Emily alone to pee. She looks really upset, I’m guessing she thinks that Emily and Jesse are in some sort of relationship. Eugene made his dad breakfast, but suddenly things get very bad. Eugene is trying to be helpful and offers to cut up his dad’s breakfast. As he cuts the omelet, his dad looks more and more upset and yells that if Eugene really wants to help that he should just finish the job and flings the plate of food across the room. Eugene doesn’t say anything and just gets up and begins cleaning up the eggs.

Odin has been reflecting on his sins and is telling the mayor that it’s time to make amends. He now wants to help the town and listen to what the mayor’s suggestions. Donnie is really confused by his boss going to church and he suddenly realizes that something must be up with Jesse. He insists on knowing what Jesse said to Odin and when his boss says he told him to serve God and that he plans to do that from now on, Donnie looks very freaked out. At the diner Jesse is listening to townsfolk and hearing their problems. He’s not just giving normal advice though, but instead is giving some magic voiced suggestions. Tulip suddenly slides into the booth and starts telling a story about how her boyfriend killed a komodo dragon because the guy they sold it to was flirting with her. Jesse then says that the guy was going to eat the lizard anyway. He insists that he’s changed and that Tulip can to. A waitress tells Jesse that something outside wants to talk to him, and yep, it’s Eugene. He’s still a person, but geez this town is full of jerks. Eugene is there to ask Jesse for help, not for himself, but for his dad. He asks Jesse to pray with his dad because he isn’t sure what else will help and Jesse gets a bit of a frightening look on his face. Then he says they’ll think of something.

Jesse goes to Tracy’s house, the girl who he magically willed to open her eyes. Eugene is in his truck and Tracy’s mother grabs a bat and starts shattering the truck’s windows. The whole time she keeps yelling murderer and that she’s going to kill him. Jesse wills her to stop and then to forgive Eugene. The two of them hug and sappy music plays. Donnie and his wife are having lunch together. He seems super out of it and tells her that he thinks Jesse has a power. Then he starts rattling off people that Jesse has made do things and tells her about what happened with the gun in the gas station bathroom. She tells him it’ll be okay and Donnie starts crying. His wife says that sooner or later Jesse will get his. Back in Jesse’s truck, Eugene asks what just happened with Tracy’s mom and Jesse says that now his father won’t have to suffer anymore.

Tulip is sitting outside a drugstore, after a moment she yanks a mask over her head and heads inside. She robbed it in order to get opiates for Cassidy and after finding him at the whore house she tells him that this means they are in love. The two of them then have what appears to be very uncomfortable sex. During this time the gentlemen finally talked to Heaven and then go to meet with Jesse. They mention that they gave tons of money to get him to do what they wanted and Jesse says he’s never met them. They then say that they told his best friend about everything. This whole conversation is very strange and Jesse totally doesn’t believe anything that they are saying. DeBlanc and Fiore reveal that what is inside Jesse isn’t God, this definitely doesn’t seem good. At the slaughterhouse Odin is meeting with the sustainability people. The meeting seems to be going fine until Odin pulls out a gun and shoots everyone except the mayor. I’m not sure how that serves God, but Jesse’s powers really aren’t perfectly honed yet.

Share your Preacher thoughts with us in the comments or on Twitter, @thenerdygirlexp. You can also find me on Twitter, @kleffnotes, on my blog, kleffnotes.wordpress.com, my kleffnotes YouTube channel, I run The Nerdy Girl Express Snapchat, thenerdygirlexp, and post recipes on the iZombie Support Group site.