Tish Tindall (known as The Fabulous TT) is a Scottish composer that has made a name for herself in musical theater. Tindall was born in Glasgow and grew up in Aberdeenshire. The Scottish performer has a array of talent in variety of musical instruments and is accomplished on piano, cello, guitar and percussion as well as vocals. She is comfortable on stage and has a commanding presence. Along with Diane Aspinall, Tish co-founded the Scottish Performing Arts College and Theatre School Lossie Entertainment Academy, which helps to teach the next generation of musicians.

Tish has created a musical based on Scottish poet Robert Burns titled Robert Burns: The Musical. She took the time from her schedule to answer The Nerdy Girl Express’ questions about this musical as well as what influenced her to pursue a career in music and composing. She is insightful and passionate.  Read below to find out what she had to say.

Who were your influences that set you on the road to discovering your passion for music and composing? 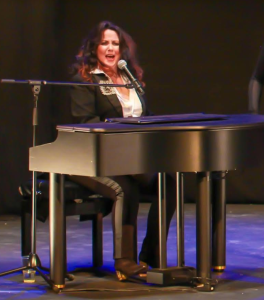 Photos Courtesy of The Fabulous TT

“Valley of the Kings” and other music by The Fabulous TT are available on Apple Music: