Emily Piggford is back to The Nerdy Girl Express for another interview about a new series. She is now The star of the CW series Warigami and I had the chance to chat with her about her character Wendy Ohata as well as some of her other projects. Thank you to Emily Piggford for coming back to chat with me again.

I’ve chatted with you before, but could you tell our readers a little about yourself?

Yes, thanks for having me back! A bit about me: grew up on a little farm by the sea on Vancouver Island, B.C., first thing I wanted to be was a singer, used to make my family watch me dance to Enya, started acting when I was 11 and I love it to bits, one of my goals in high school was to touch my toes by the time I graduated (did it), I’ve tried to unlock my telekinetic ability (no dice, yet), studied acting at the University of Victoria and the Canadian Film Centre, am enthusiastic about eco-conscious and sustainable living, my pump-up music includes ABBA and Def Leppard, I like puzzles and pumpkin pie, my favourite season is Fall. Pisces.

How would you describe your new show, Warigami?

You play the lead character, Wendy Ohata, could you describe your character?

Wendy is incredibly driven, oddly formal, and often accidentally funny. Beneath the rather studios warrior exterior is actually a very lonely girl. I think she put her heart in a cage after being abandoned by her family and adopted when she was a child. She’s prided herself on her discipline and intelligence and now duty. Watching her try to maintain that composure in the presence of Vincent (Kai Bradbury) and Mark (Akiel Julien), who are a little less… organized than her, leads to conflict and comedy. (And, ultimately, personal growth.)

Did you have to do any special or additional training for the show?

Yes, Taekwondo! LOVED IT! I’m such a fan of shows with exhilarating fight scenes and action so it’s been a lifelong dream to get to do some of that. I’ve been dancing since I was four in various styles and have a foundation in dramatic combat, but day-to-day, my natural rhythm is pretty gentle. I’m about those sunrise runs and yoga at home. But acting is honestly the greatest motivator for me to dial up the intensity and I was so excited to get to dive into Taekwondo and some weapon work for Warigami. Thanks so much to our incredible stunt coordinator Master Chang, the teachers at his academy Black Belt World, and the skilled stunt team, especially my doubles Melanie Phan and Tsu-Ching Yu.

What have been some of your favorite on set moments?

Everything we shot in the library. It was so much fun to be in the giant, gorgeous Toronto Reference Library after hours for two full night shoots back-to-back. A lot of story action goes down in the library so there were many exciting, challenging and cool moments behind the scenes for camera, props, makeup, stunts, performance…

What do you hope viewers take away from Warigami?

I want audiences to enjoy it and to feel excited by these present-day Japanese superheroes! I want viewers to fall in love with Kai Bradbury and Akiel Julien and Miho Suzuki and honestly I think that is very easy to do, so I don’t really need to request that. 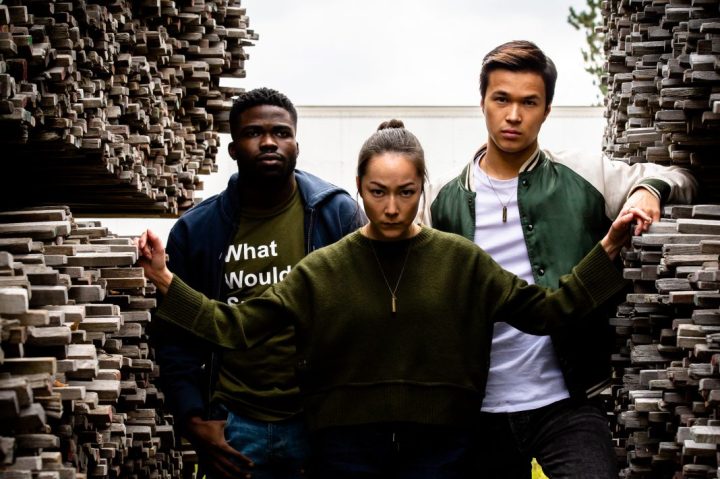 You have a pretty prolific body of work and we’ve previously spoken about The Girlfriend Experience and That’s My DJ, but could you describe your recent work on The Umbrella Academy?

I loved working on The Umbrella Academy! First thing to say: Ellen Page—she is deeply wonderful to work with, so talented and just one of the best humans. My character, Helen, is a rather icy first-chair violinist and it took serious focus for me to give Ellen’s character, Vanya, the brush off, especially as Vanya is so meek, sweet and put-down at that point, all you wanna do is hug her. But my character, with all her snobbiness, skill and status, serves as a stepping stone in Vanya’s evolution. Producer, Jeff King, is also incredibly lovely. He was there with such positive energy in my audition and on set and I got to work with him as a director as well for some pickups about a month after I’d initially wrapped. Very grateful to him. I’m also jazzed just to be part of this rollicking, thrilling, stylish series (with the best soundtrack) based on the comics by Gerard Way illustrated by Gabriel Bá. I saw the show described somewhere as something like “X-Men for Twin Peaks fans”– shoutout to whoever said that, because I think that’s pretty brilliant.

You have also done some voice work, could you describe Gary and His Demons and your roles?

Gary and His Demons is an adult animated series about Gary (surprise!) who is hoping to retire after an arguably heroic, definitely harrowing life of fighting literal demons, which has left him with many internal demons, (and bitterness). Gary is voiced by co-creator Mark Little and accompanied by an awesome comedic cast. I play Sakura, a very nervous new demon hunter from Japan, as well as essentially her boss, the gracious and formal Aiko in the episode “The Seven.” We recorded the scenes with all of us in the booth together, which was very fun, funny and humbling and left plenty of room for improvisation. The episodes are around 10min each so I highly recommend watching if you’re craving a snack of some deliciously dark, clever LOLs.

You also had a project premiere at TIFF this year, It’s Nothing, could you describe this and your role?

I play Robin, a young woman focused on digging a very deep hole with the encouragement of her very cool and beautiful friend (Cara Gee). Over the course of the piece, we realize that the beautiful girl and the digging and the hole are representations of Robin’s anorexia. The film is written by Julia Lederer with great insight, creativity and vulnerability; directed with care and a haunting air by Anna Maguire. It’s an effective exploration of something that I think is often difficult to discuss—whether because it’s hard to convey to those who don’t understand it, or because of stigma around mental health and eating disorders. Something we illustrate with the film is how isolating the disorder is. I hope this film can help dispel some of that isolation and any stigma by bringing the conversation to the surface and reaching out a hand to those who are or have been in “the pit” of it.

I’m currently in New Zealand shooting a series that I’ll be able to talk about soon! This summer I also got to take a turn on the hilarious new mockumentary series New Eden, from co-creators/co-stars Kayla Lorette and Evany Rosen, directed by Aleysa Young, coming out this winter on Crave TV. I also acted alongside Aaron Poole and Vlad Alexis in an upcoming short film directed by Dan Abramovici called liminal, which takes an abstract look at struggles with intimacy and addictive cycles in relationships.