The Walking Dead returned this past Sunday and it did not disappoint in being action packed.

We start off exactly where we ended last year with Daryl, Abraham and Sasha being confronted by Negan’s men. The main one sends Daryl and one of his lackey’s to the back of the truck to find goods while he threatens to shoot either Abraham or Sasha, or maybe he was going to shoot them both.

Daryl must be a bona fide ninja now, because not only did he kill that guy behind the truck weaponless and while he was on guard, but also silently because no one heard. Not only is Daryl a ninja, but he is also somehow trained in military weapons as he was able to properly load, aim and fire off his rocket perfectly to kill all the baddies. I side eyed this quite a bit because while I love Daryl and I wanted all three of them to live, this was stretching my imagination about what I know this redneck man is capable of doing.

That wasn’t the last time this episode tried to stretch it’s own rules, but we’ll get to that soon enough.

We go back to Alexandria where Rick and the group are slowly making their way through the horde of walkers. We all know Jessie’s son Sam was asking for her when the last episode ended and we all wondered how that would work out. Miraculously the walkers seem to not hear him? It was strange as before even whispers could get their attention. I also wondered about their ‘walker outfits’ and the fact none of their faces were smeared as they used to do.

It was suddenly night time (which threw me off a bit), when they decide to stop and discuss what to do. Again, no walkers bother them and the group is able to split up. I liked that Father Gabriel has really stepped up the last two episodes and he did so again here, taking charge of the ones going to the church and being entrusted with Judith’s safety. His character has really grown and I hope fans can remember that’s the important part.

For some reason the adults of the group decide that young Sam can decide for himself that he is brave enough to continue facing the walkers. Why, I’m not sure as he had shown time and again how frightened and traumatized her was. Sure enough, his courage soon leaves him and he remembers Carol’s words about the monsters eating him up (way to go Carol) and he starts talking again. He’s no louder than he was before, but this time the walkers hear him and immediately start chowing down. 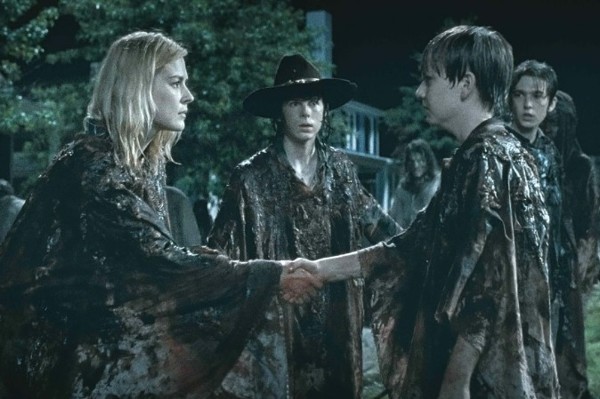 Jessie is horrified watching this and starts screaming and so the walkers get her too while somehow completely leaving the others alone because they’re holding still, I guess. Walkers are like T-Rex’s now. Rick has a sad flashback of all the coy looks Jessie gave him, as that’s about as far as their relationship had been, and then chops off her hand when he realizes she’s still holding on to Carl.

No one seems to realize that Ron might react poorly to this, seeing as how he’s reacted so well to everything else and he points his gun at Rick. Michonne decides she can move then and stabs Ron. His shot goes wide as falls and dies and we hear Carl say, “Dad?” and you see that his eye has been shot out. He crumbles to the ground and Rick and Michonne get him to the medical building as fast as they can.

While I knew this was the end result for Carl (comic spoiler) I felt it took a lot away from Jessie and her sons dying. They had built up those characters a lot and I felt they were just thrown away in a quick scene. 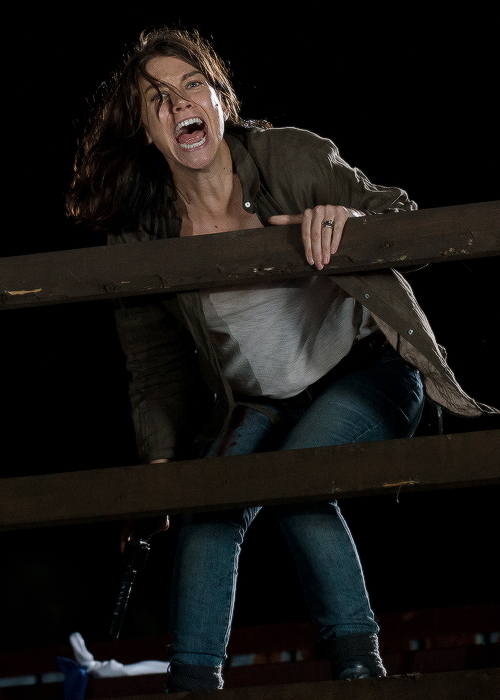 In other parts of Alexandria, we find that Carol and Morgan are still arguing moral ideologies instead of you know, helping their friends and neighbors. I’m exasperated with both of them at this point and wish their story line would move on already.

We also have Denise and the wolf out in the walkers. They immediately notice them and they have to make a run for it and cover. It’s revealed that the wolf is bitten and Denise, still trying to talk to him, tells him that if he can get her to the medical building, she can save his life. They go for it, but there are too many walkers. Plus Carol shows up on a balcony and shoots at the walkers and the wolf. He knows he’s going down and he’s already bitten and it’s unclear if he really had a change of heart towards Denise, but he yells for her to run and holds on to one of the walkers. I would like to think Carol will have a bit of a crisis about this, but I doubt she will.

Denise makes it and there are others already in the medical building. She has a nice character development where this time she is brave and starts to give out orders to the others. I like seeing Denise come into her own, at least they gave credit to ONE Alexandrian so far. We’re left with her treating Carl.

Rick in his great wisdom, decides that after he deposits Carl that he needs to go out into the walker horde and chop away at them. I can’t help but point out that if and Alexandrian had done this, he would have called them idiots, but because it’s Rick its brave or whatever. Sorry, just not a fan of his reactions. Still Rick’s actions motivates many of the others from our group and other Alexandrians and they come out to help him. When they all work together they are making decent headway, but there are still too many walkers.

While most of the main group is together now, Glenn, Enid and Maggie are still at the gates. Glenn makes a plan to distract the walkers and then Enid can climb up to Maggie and they can run. This works out great, except now the walkers are surrounding Glenn. In another ‘is Glenn going to die’ scene he is suddenly saved by Abraham and the others who have shown up. Together this group goes into Alexandria and sees what has happened. They formulate a plan in another twist that makes no sense to previous walker rules, Daryl dumps gas into the water and lights it on fire. Now walkers have been shown to be attracted to fire and they are here as well and go right into it. Where it changes is that before, in several places (Atlanta, Woodbury and the trailer Daryl and Beth burned down) that walkers aren’t killed by fire. They will burn and they may not be able to get up, but they don’t die. Here they do though. Why, I don’t know, but I’ll admit it did look cool. I just wish they would make their rules and then stick to them.

The scene shifts to the next morning where there is nothing left but dead walkers, undrinkable water (I’m assuming), and a lot of clean up. I’m not sure how many Alexandrians made it, but hopefully they will be more than just fodder worthy. We do get a nice scene of Rick apologizing to an unconscious Carl and telling him that he had been wrong (VINDICATION!) and Carl squeezing his hand.

Overall I did like the episode. I liked seeing that the walkers can and will still be dangerous in the series. I want to see what will become of Alexandria. If they can rebuild or if they will abandon it. When will Negan come back and when he finds out what happened to his men, what kind of retribution will he want?

Tell me what you liked and disliked about the episode in the comments below or on my twitter @quietlikeastorm or @TheNerdyGirlExp. Also make sure to subscribe and never miss another TWD article or any of our others. Also here are TWO previews (aw yeah) for the next episode which will air on February 21st at 9:00PM/ET on AMC.

One thought on “#TWD is on Fire”