A murdered Chinese pop star, an unconscious bodyguard, and the return of the red hatted boy were all crucial to last night’s episode of Stitchers on Freeform. Not only that, but there are ships in peril in the stormy Stitcher seas that I really need to discuss with you lovely people. Let’s get to the recap, and the armada of feels.Kirsten has been hard at work trying to track down her father’s first wife, Elizabeth Brown, and with that knowledge, and some phone numbers from Fisher, she has been calling every Elizabeth Brown in the area. She has to take a break from her calling quest when Camille tells her that they have a case.  With Camsten on a break, Cameron has been spending a lot of time with the ever adorable Nina. The two of them pulled an all nighter discussing movies, superheroes, and other fun, nerdy topics. In the lab the Stitch team learns that a famous Chinese pop star has died and the authorities believe her bodyguard was involved. They have a very limited amount of time to investigate before the Chinese officials come to take the body and arrest the guard. After their meeting about the case, Linus asks Camille if she’s alright and wants to spend time with her, she says she needs to study, but really she’s doing more stuff for Maggie. 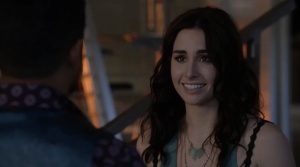 During the stitch, Kirsten sees that the pop star, Coco, was being blackmailed by a paparazzo. He caught her with another man, who she met with without her bodyguard, Mei Ling. Kirsten gets pulled to the time of the murder and sees that a Chinese man attacked Coco, but that Mei was already unconscious and couldn’t have been involved. Fisher goes to talk to Mei and winds up cuffed with his own cuffs, he really needs to get a handle on his cop belt. After that bit of awkwardness, he and Kirsten go to see the blackmailer and find him dead, and Mei is there. After bringing her in for questioning at the lab, she wants to help them find out what happened to Coco. She and Fisher team up while Camille is working on Liam things, Kirsten is trying to track down Elizabeth, and Cameron is freaking out about the dinner that is happening. Oh yeah, Kirsten wants to meet Nina and has invited Cameron and his new girlfriend over for dinner.

The dinner goes surprisingly well. Kirsten made pancakes, Nina made a fun Doctor Who reference, and Cameron didn’t have a heart attack (seriously it looked like he was going to). Nina though finds Kirsten’s crime wall and this leads to an interesting moment between the three of them. Camille also finds herself in a bit of an awkward situation with Liam and the two wind up kissing on the porch very late at night. Fisher spends a pizza filled night with Mei, the two of them are very cute together and I totally ship them. Linus is dealing with his own issues. He made dinner for Camille to eat while she was studying, but when he went to give it to her he found out she wasn’t at the library. When he directly asks her whether she was there she tells him no, which is heart breaking. Camus is such a great ship and I love Camille and Linus together. I really don’t want this secret Liam mission to break them up. 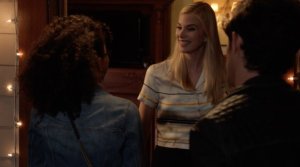 When we get back to the case it turns out that the man Coco was with isn’t a lover, but is instead her father. He was thought to be in a Chinese prison, but had escaped to America and Coco was reconnecting with him. The man who killed her was looking for her father, which leads to a very intense fight scene. That though happens after Kirsten has a chat with the boy in the red hat. Turns out it’s not just any boy, it’s baby Cameron. Someone put him in her mind as a means to share information with her, but we don’t know who yet. Seriously, who made baby Cam?! He tells her there will be something waiting for her on her porch and that will prove someone is looking out for her. After that fight I mentioned breaks out at the Chinese green house Coco’s father works at, Kirsten comforts him by speaking in Chinese. When she comes home she finds a Coco record with a slip of paper with what she said on it.

Things are getting very intense on Stitchers. Red cap Cam is a secret construct from someone we don’t know who wants to help Cameron, well hopefully they want to help her and aren’t just playing her. Ships though are in all sorts of turmoil with Camus dealing with an attack from Liam and Camsten is still apart (I love Nina though so I’m having my own issues being okay with Camina and still wanting Camsten to exist). Share your own Stitchers thoughts in the comments or on Twitter, @thenerdygirlexp. Find me on Twitter, @kleffnotes, on my blog, kleffnotes.wordpress.com, my kleffnotes YouTube channel, on Snapchat, thenerdygirlexp, and I post recipes on the iZombie Support Group site.