You know things can’t be going well when an episode starts with Dutch alone in a damp, dark hole in the ground being told she’s a Six by Khylen. If things weren’t already bad, she gets stabbed and starts bleeding green goo. Definitely not good!

Now we jump backward 12 hours and are with Turin, right where we ended last week. He’s sending the team on the trail of three Killjoys who had a message intercepted by Khlyen and haven’t been seen since. They get to the planet where the other killjoys went missing and after some investigating head back to Lucy. Johnny contacts Pawter and she is up to something, but doesn’t say just what as she talks to him. After trying to break into Jelco’s computer, she insists she needs to go. Alvis is out of his robes and tells Dutch that he’s considering leaving his order, but she doesn’t want him to give up on something that means so much to him. She does say that she really isn’t sure what she believes right now and isn’t the best person to look to for religious advice. The trio is back out investigating and finds Tanya, one of the Killjoys who sent the evac call that Khlyen intercepted. Dutch says that they are here to help her and even disarms. She continues asking Tanya questions and points out that she thinks Tanya saw something that she wasn’t supposed to. Tanya asks if they will come down with her to get Deena and that’s when we see the mine shaft.

The cave is full of crystals, but it turns out that the warrant that Tanya and the other Killjoys were after was to get a monk. She didn’t understand why a monk, but it was a really good warrant. Alvis has joined the team for this mission, he was a miner once so he has cave experience. While he’s marveling at their tech Dutch says that the gadgets are just one of the many perks of being a Killjoy, two others include sexy jackets and early death. Tanya says they went underground to stay safe because her husband has been trying to kill her and Deena, but they don’t know why. Pawter is talking to her father about what happened to Hills and he insists that whatever Jelco is doing must be on orders from the Families. Jelco enters and cuts off the call, then warns her that she isn’t safe if she tries to leave Spring Hill. Back in the mine Alvis is helping to get them around,  Johnny says that the crystals are messing with some of his tech. They find more weird moss, it was on the ship they saw when they first checked out the planet, but they aren’t sure what it could be. The group splits up to try and find Deena, but Dutch definitely doesn’t trust Tanya. Pawter is being propositioned by Jelco, oh not for sex, no to drain his messed up heart, which apparently came about through genetic defects created through inbreeding. Not something I’d brag about, but hey, Jelco isn’t exactly the most normal of people.

In the mine, D’Avin has found another shaft that leads down even farther, but avoids it. Tanya then runs off when she sees Paolo, he says that they are trying to kill them and she shoots at him. Dutch tells Johnny to take Tanya to Lucy because she’s a liability, but she looses it and starts shooting. This reaction leads to a cave in, which cuts Johnny off from the rest of the team. Johnny can get out of the mine, but no one else can. He’s headed to Lucy for equipment, when suddenly we see the moss begin to crawl after Dutch. Pawter is working on Jelco and he is very chatty indeed, then she cuts him. When his body guard attacks she manages to knock him out. Johnny is on Lucy and she can’t contact Pawter, her com has been disabled, and she’s been doing some research on the Red 17 base and how it was destroyed. She says that Turin was telling the truth and that data was moved off site. D’Avin has found a massive tree inside the mine and a bunch of bones. Alvis says he’s seen temples below ground before, but never this deep. They find a symbol that he recognizes from scripture, he remembers it from a story about 12 monks who went to fight the devil. Alvis also says that this mine had to have been shut down because there are plenty of crystals that could have been mined. Tanya is wandering the mines and still keeps shooting whenever she hears anything. She sees Paolo and then falls into a hole full of the creeping moss bugs. Before they can do anything the bugs swarm her. 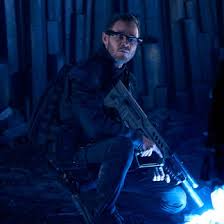 Johnny says he needs about ten minutes to burn his way through to them and Dutch insists he do an analysis, though he isn’t sure of what. He manages to grab a moss bug, which he thinks looks like an angry vagina. Then he calls them moss covered centipedes, which isn’t any less unpleasant. The bugs also emit a psychotropic drug of sorts, which caused Tanya to hallucinate Paolo. Pawter finally contacts Lucy and learns that Johnny is coming for her, she also managed to use her blood covered glove to get into Jelco’s computer. She finds plans to tons of walls, just like the one in Old Town. Johnny is cutting up bugs and D’Avin is trying to squish them, but they don’t die. D’Avin thinks that these mossy bugs are what makes the green goo that turns people into level sixes. Alvis goes searching in the mine and finds a Scarback in a hidden section. Dutch is alone and suddenly sees Khlyen, she tells the others that she saw him, but they don’t understand why he would be there. As she follows him she falls into a shaft and winds up where we saw her at the start of the episode. 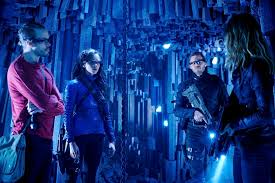 No one can get in contact with Dutch and as we watch the events from the start of the episode unfold again, Johnny burns through the cave in and they all run toward Dutch. In the shaft Dutch is bleeding out green, when suddenly Khlyen turns into Dutch. Yep, Dutch is stabbing Dutch and telling herself how he made her just like him. All the guys have made it to Dutch, but she is lost in her own mind. Johnny tries to talk to her, but she pushes him away. Alvis kneels down and shows her that she’s bleeding red and insists he won’t leave without her. After talking her out of her mind they make their way toward the exit. D’Avin is standing near the bugs and they start crawling away, he don’t know why they don’t like him, but they have him lead the way out. Johnny took a mossipede, which is now living in a little glass container on Lucy. Dutch says they should go get Pawter, which leads us back to Spring Hill. Pawter is very sneaky and got her explosive anklet off and attached it to Jelco’s heart. She gets out, but before anyone can get to her she is struck over the head by a hooded figure. On Lucy Alvis and D’Avin aren’t exactly getting along, but Alvis does thank him for killing him to save him under Spring Hill. D’Avin leaves Alvis to talk to Dutch and he reveals that he found something in the mine. The salvage warrant was for a dead monk who had left a message about what the 12 Scarbacks who went to fight the devil did. One managed to survive, which connects Scarbacks to Arkyn and Khlyen. Lucy announces that she figured out something about the data from Arkyn and this leads Dutch to Turin. She insists he tell him what he got and write her a warrant to get her there. It looks like Dutch is now running the show, no matter what Turin thought was going to happen.

We might have figured out where the green goo has come from, but that doesn’t tell us how Dutch was in the memory D’Avin saw of Arkyn or what Khlyen has been up to in connection to the level sixes. Also what happened to Pawter?! So much is happening this season and I am definitely excited for next week. Share your Killjoys thoughts with us in the comments or on Twitter, @thenerdygirlexp. You can find me on Twitter, @kleffnotes, on my blog, kleffnotes.wordpress.com, on my kleffnotes YouTube channel, I run The Nerdy Girl Express Snapchat, thenerdygirlexp, and I post recipes on the iZombie Support Group site.