The Chair is a terrifyingly twisted horror film based on an equally horrifying Alterna Comic of the same title. If you want something that will having you cowering in fear, while simultaneously keeping you on the edge of your seat you need go see this movie.

When you watch The Chair you need to make sure you are in a dark room, preferably a theater full of people whose terror you can feed off of as you’re bombarded with frights you can’t even begin to expect. The story is focused on a death row inmate named Richard Sullivan. While he insists he’s innocent of his crimes he is forced to watch as other prisoners are tormented by malicious guards and a sadistic warden. As you see what Sullivan sees you will be shocked, uncomfortable, and desperately want to close your eyes, but don’t. These horrors are there to prepare you for so much more. 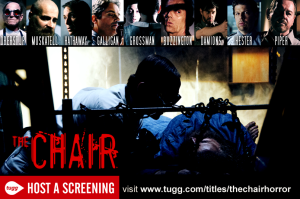 The Chair feels like a much older horror movie, but in the best way. Each gore filled scene will remind you of horror days gone by where any character could face a grim and horrific death at any time. I felt like I was watching a horror movie from the 80’s, which I absolutely adored. There were moments where I was literally on the verge of shouting obscenities at the screen because I was so terrified of what was happening before me. Not only was I visually captivated, but the soundtrack had me on edge as soon as the opening credits started. You will be shocked by how the movie ends, just you wait! 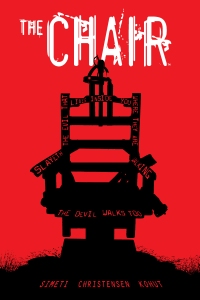 You can find screenings of The Chair starting in October of this year, which is the perfect time to check out this frightening film. The very first showing will be in Bubank, California on October 18th. You can find a list of showings on the official The Chair movie website and you can find The Chair on Twitter, @theCHAIRhorror. Tickets are available for order exclusively through the website, Tugg.  Check out the debut trailer below:

Share your thoughts with us in the comments or on Twitter, @thenerdygirlexp. You can find me on Twitter, @kleffnotes, on my blog, kleffnotes.wordpress.com, on my kleffnotes YouTube channel, I run The Nerdy Girl Express Snapchat, thenerdygirlexp, and I post recipes on the iZombie Support Group site.