My mind is still reeling from the events of the Series Finale of Reign titled “All It Cost Her.”  In this article, I’d like to share my thoughts on the episode.

This article contains spoilers for the Series Finale episode of Reign titled “All It Cost Her.”  If you haven’t seen the episode, please do not continue reading.

The writers of Reign were tasked with a difficult undertaking: Ending the show in a way honoring the legacy of the series.  One of the biggest questions many viewers wondered was whether Reign would stay true to history, which would mean addressing the beheading of Queen Mary of Scotland (played by Adelaide Kane).  This is a challenge faced by writers when presenting material based on the life of a real person.  Of course, an adaptation for entertainment purposes often occurs. New characters and accounts are created in order to make the retelling viewer friendly, but tragic events can’t be glossed over when they are a part of the real life tale. For example, no matter how horrific the sinking of the Titanic is, a movie about the tragedy couldn’t end with the luxury liner getting a last minute reprieve. Such is the case of Mary, Queen of Scots. She’s beheaded, that’s fact…how would the writers handle that?

Prior to watching the series finale, I speculated that in the ending minutes of Reign we’d see Mary living her life as queen then a fade out with words coming across the screen that Queen Mary of Scotland was beheaded on February 8, 1587 for treason.  Well, the writers did stick to history.  In a creative storytelling path, we get a fast forward 21 years. We see an older Mary imprisoned and asking whether she can see her son James. Then, the scene cuts to an adult King James (Jake Foy) of Scotland meeting with Queen Elizabeth of England (Rachel Skarsten) to discuss his mother’s situation.  Let me say right here: The makeup for the older Elizabeth was amazing. She bared a striking resemblance to the images of Queen Elizabeth of history. Back to the scene, King James asks Queen Elizabeth for leniency for his mother, reminding that Elizabeth had offered her help to Mary. But Queen Elizabeth told James that he’d have to decide whether he wanted to be king of both Scotland and England, reuniting the kingdoms (as was his mother’s wish for him).

When next we see Mary, she learns that her son is not coming to visit her. Then the Queen of Scotland is led to her execution, prays for God’s mercy then places her head of the chopping block.  The executioner raises his ax. Then…cut to a young Mary in bed with Francis (Toby Regbo).  Yes, Reign fans got a joyous reunion for “Frary.” It appeared that Mary was in Heaven with her true love Francis. It gave the couple a happily ever after so to speak as well as closure. 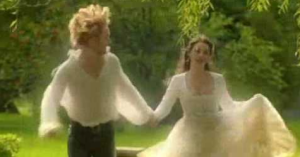 Now on to the other series finale plots. Catherine (Megan Follows) took matters into her own hands to deal with her sons Charles (Spencer MacPherson) and Henri’s (Nick Slater) vying for Nicole (Ann Pirvu) and France.  Her solution? Getting witch Emanuelle to use her powers to kill Nicole. So while aboard the Spanish ship, Nicole falls victim to the magical treachery. I liked the character of Nicole and with the series ending, had a feeling that her life would’t be spared. Loose ends had to be tied up and keeping Nicole alive for Charles and Henri to fight over would have only worked if the series had been given another season renewal. I’m sadden by this because I can envision many great story ideas for these three characters.

The turbulent relationship between Mary and Darnley (Will Kemp) reached its conclusion. Once Darnley kidnapped their son, I knew his days were numbered. Bothwell (Adam Croasdale) had been warning Mary for weeks about the danger he (Darnley) posed to Mary and her kingdom. Mary knew what Bothwell said was true, but she still held out hope (as did I) that Darnley could change and be the good man she believed him to be. However feeling she had no choice, Mary asked “Will you kill my husband for me Lord Bothwell?”  So, Bothwell decided to set off an explosion at the place where Darnley was staying to trap him inside. When Darnley survives the blast, Bothwell finishes the job and Darnely dies at Bothwell’s own hands. Of course, witnesses alert John Knox and both Mary and Bothwell are implicated in the king’s death. I just wish that we would have gotten to see John Knox pay for his numerous crimes.

Reign’s final episode showed the strength of Elizabeth as a queen who refused to cave to an ultimatum or back down. Her “I may have the body of a woman but I have the heart of a king” speech to her subjects was powerful. She’d die with a sword in her hand.

If only Mary and Elizabeth had forged an alliance, think what a force to be reckoned with they could have been!

I feel there were some characters that didn’t get story closure like Claude (Rose Williams) and Narcisse (Craig Parker). And Catherine going to her other daughter Princess Margot (Rebecca Liddiard) felt unneccessary. Why show the character in the series finale if nothing would come of it? I’m sure the writers had their reasons, but it just left things open ended.

Nonetheless, I offer my heartfelt thanks to the writers, cast and crew of Reign. The series as a whole was a marvel; it took historical characters (and some created ones) and opened up an interest in a time period that otherwise might been kept in history class. And in the final season with only sixteen episodes, Reign built upon its mythology and upped its game, showing more of the political intrigue of running and fighting for a kingdom. The best part was that the three pivotal characters were women. Mary, Elizabeth and Catherine lived in a man’s world; a time when women weren’t valued except as show pieces to a man.  But these ladies were Scotland, England and France and no one could dispute that.  So here’s to Reign…long may you reign as an example of blending fiction and history in a supreme way.