The mid-season finale of Supernatural was an episode titled “The Bad Place” and introduced a new character as well as putting Sam and Dean in the “we are so screwed” position that fans have come to expect for the brothers at the conclusion of the first part of the season. Here I offer some thoughts about the episode.

The opinions offered are that of the writer and not of The Nerdy Girl Express and may differ from those of others. This article contains spoilers so if you haven’t seen the episode “The Bad Place,” please do not continue reading.

While Dean’s (Jensen Ackles) initial feeling about Jack (Alexander Calvert) was that he was evil and should be ended, he has since changed his mind. It is not certain (except to the writers who are penning the outcome) whether Jack will remain a friend or become a foe of the Winchesters.  But in the meantime, Jack is shown as confused as to who he is. Yes, he knows that he is Lucifer’s (Mark Pellegrino) son. But does this mean that the “spawn of Satan” must be an instrument of world destruction? Is nature more powerful than nurture?  If so, Jack would be reigning wrath upon the world and making daddy proud. But he’s also human, so maybe Jack is more like his mother Kelly (Courtney Kline). Then again, as Sam (Jared Padalecki) and Dean have been the ones “raising” him, Jack has adapted to their hero mentality. He wants to help people and also prove that he is good. To that end, Jack seeks out dream walker Derrick Swan with the goal of bringing Mary (Samantha Smith) back from the Alternate Earth.  After some angels murder Derrick, (Side observation: Angels are becoming more and more demonic as the series progresses; how often have we seen these winged messengers of the Lord kill innocents to their own end?) Jack seeks out Kaia Neyes (Yadira Guevara-Prip), another dream walker. 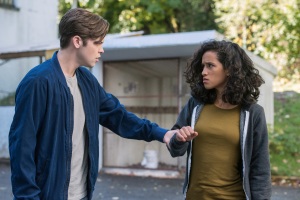 As most viewers know, Kaia has a part in the Wayward Sisters backdoor pilot so her introduction in “The Bad Place” set up who the character is and her abilities (Clark Backo also returned as Patience Turner). Like Jack, Kaia is struggling to find out where she fits in. She has this ability that frightens her.  I think that Kaia also has a mistrust of people so it will be interesting to see how she’ll accept Jody (Kim Rhodes), Donna (Briana Buckmaster), Claire (Kathryn Newton), Alex (Katherine Ramdeen) and Patience.

It seems that Supernatural has shifted its focus away from the brothers and more towards Jack, with Sam and Dean acting as his mentors. Whereas in the early days of the series, Sam was described as Star Wars’ Luke Skywalker and Dean as a smart-ass Han Solo, now they are sharing the joint role of better looking Yodas.  I don’t know whether this is a deliberate move of the writers to gear the twelve year old series in the direction of younger audiences, but the lighter presence of Sam and Dean this season is causing fans to take notice and sadly have driven some away.  I’ve admitted on more than one occasion that my favorite seasons of Supernatural were the earlier ones that was primarily just the brothers using the skills taught to them by their father to hunt monsters. But I guess the show had to change (to include new characters) and evolve (into a mythology that includes angels, the devil and his son) in order to maintain its place on the network. And with movies like Wonder Woman encouraging strong women and girl power, in my opinion it was just a matter of time before the Supernatural franchise branched out in this direction. 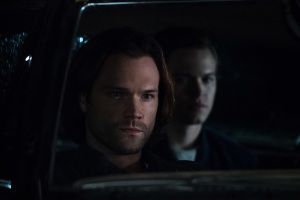 Jack is like the little brother Sam and Dean never had (And no I’m not forgetting Adam, but that character never really got the chance to become ‘Winchesternized’). The best scene in “The Bad Place” to me was the one in the car when Jack asked why would he look for Lucifer and told Sam and Dean that they and Castiel (Misha Collins) were his family. I love the loyalty Jack already feels for Sam and Dean. His child-like innocence is also appealing to me. There’s something about the looks that Alexander Calvert gives when delivering Jack’s lines that has made me accept the character more than I thought I would.

As “The Bad Place” concluded, Jack and Kaia used their combined powers and he ended up in the Alternate Earth with Mary while Sam and Dean seem to be in the bad place of Kaia’s nightmares.  It looks like some sort of Jurassic Park-like world. The question will be whether Ruby’s knife can kill a dinosaur or prehistorical bird or whatever the heck left that footprint. I don’t know how I feel about Supernatural venturing into this territory; fighting evil and monsters are one thing but dinosaurs are another. Though as a child of the 70s, I will laugh in amusement if Dean makes a reference to Sid and Krofft’s Land of the Lost while he starts humming the theme song while Sam gives him the bitch face! Here’s hoping that our heroic Winchester brothers can escape the land that time forgot and get back to the family business.