A weekly column highlighting the Port Charles happenings during the past week on General Hospital. Read below to find out what you missed or to refresh your memory in time for next week.

Margaux (Elizabeth Hendrickson) found Drew (Billy Miller) holding a flash drive and ordered him to put it down. He asked whether it was anything important and she told him that it was evidence for an upcoming case she was working on. Drew accused Margaux of lying. Sam (Kelly Monaco) questioned Kristina (Lexi Ainsworth) about her delaying her return flight back to Parker. After listening to her sister, Sam made an observation that Kristina seemed to be sacrificing everything for Parker and encouraged her sister to stay in Port Charles. Griffin (Matt Cohen) accused Ava (Maura West) of working with Nelle (Chloe Lanier) to send Carly (Laura Wright) to Ferncliff.  Denying it at first, Ava then admitted she did take the blanket to protect Griffin because Nelle was blackmailing her. He Griffin revealed despite Ava’s protests, he knew Carly was talking about her (Ava) when she said Nelle had help. Mike (Max Gail) was frightened when Jason (Steve Burton), a guard and Sonny (Maurice Benard) all entered the living room pointing guns. Carly comforted Mike as Jason found the tracker on the floor and realized Mike triggered the alarm. Sonny reminded his father that Mike is only supposed to use the tracker in case of an emergency. Curtis (Donnell Turner), Jordan (Vinessa Antoine) and Stella (Vernee Watson) had a family therapy session with Dr. Francine Massey (Guest Star Grey Anatomy’s Chandra Wilson).  Dr. Massey took notes and listened as Jordan and Stella expressed their anger and differences towards each other. Jordan shared with Dr. Massey how Sean shot and killed Thomas after Jordan’s husband learned of their (Sean and Jordan) affair. Jordan told the therapist how she regretted Thomas’ death but resents how Stella keeps blaming her about it. Stella accused Jordan of pretending family is important to her when all she cared about was herself. Jordan countered by saying Stella doesn’t want Curtis to be happy because she (Stella) missed out on her own life and chance at happiness. Dr. Francine Massey felt the Ashford family was making excellent progress for their first therapy session but felt they could use more sessions. Ava explained that Nelle was going to turn Griffin in for ordering the paternity test without Peter’s (Wes Ramsey) consent so she (Ava) was protecting Griffin so he wouldn’t be fired. But Griffin reminded that if Ava hadn’t taken the photo for leverage, Nelle wouldn’t had seen it. Griffin believed that Ava wanted Carly to be arrested because she hated Carly and was jealous that Avery calls Carly mommy. Ava asked Griffin whether he was going to go to the police and turn her in for obstruction of justice. Griffin told Ava if Sonny found out she had helped Nelle, he (Sonny) would kill her (Ava). He promised he would go to Sonny if Ava attempted to hurt anyone else. Griffin sadly realized their relationship changed him in so many ways, most of them positive but she was still the same Ava Jerome. Griffin accused Ava of using him because she didn’t have a soul. Drew apologized to Margaux when he inserted the flash drive and it contained child hood photos of the D.A. But after Drew left her hotel room, Margaux revealed that she had the flash drive with Drew’s memories hidden in a safe. After the events of the day in which he could have mistakenly shot his father, Sonny was torn even more on whether to have Mike placed in a memory care facility. 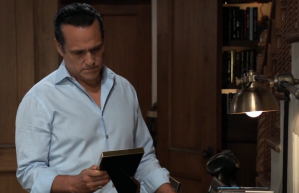 Jason (Steve Burton ) came to Sonny’s (Maurice Benard) house to see if everyone was already after the events with Mike. Lucas (Ryan Carnes) told Alexis (Nancy Grahan) that Brad (Parry Shen) would meet them at the courthouse. Lucas couldn’t believe that in a matter of hours he and Brad would learn whether they could keep their son. Meanwhile, Brad asked Julian (William deVry) what his plan was. At Ferncliff, Ryan (Jon Lindstrom) told Gordon that he was Dr. Kevin Collins and was being held captive by his twin brother. Oscar (Garren Stitt) came to the Corinthos house to go through photo albums of pictures of Josslyn to use to make a video for her to celebrate their anniversary. After Carly and Sonny left to look at facilities for Mike, Jason gave Oscar advice on how to deal with Josslyn (Eden McCoy). Lulu (Emme Rylan) saw Maxie (Kristen Storms) and Felicia (Kristina Wagner) in the park and told them that she was doing a story for The Inquister on the twenty-fifth anniversary of the Ryan Chamberlain murders. It brought up painful memories (shown via flashback) for Felicia of when she witnessed Ryan commit murder before she knew who he was. After Gordon left the padded room, Kevin commented that he knows Ryan has been pretending to be him. We got to see a flashback of Ryan and Kevin meeting for the first time after thirty years. While Nina (Michelle Stafford) discussed her divorce with Diane (Carolyn Hennesey), Curtis (Donnell Turner) met with Valentin (James Patrick Stuart) about the search for Nina’s daughter. At General Hospital, Kim (Tamara Braun) told Michael (Chad Duell) that Nelle (Chloe Lanier) reached out to her and wanted her (Kim) to testify that her (Nelle) hormones were responsible for her committing those crimes. Dr. Nero also suggested that Michael attend a bearevment support group . Brad wanted to run away with Lucas and the baby, but Lucas convince him that they couldn’t do that. Nina learned that her mother had died. With the strap of the straitjacket not tightened, Ryan was able to overpower Kevin. Jason offered to give Oscar a ride on his (Jason) motorcycle to meet Josslyn in the park.  But when Jason turned around, he saw Oscar having what appears to be a seizure. 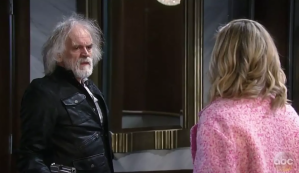 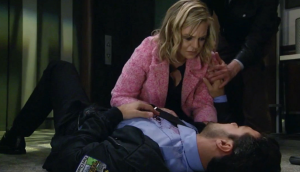 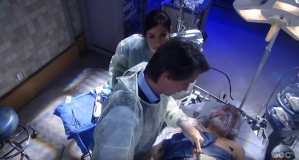