The three part crossover event “Elseworlds” began Sunday, December 9 with Episode One on The Flash. Below I offer my thoughts on what I feel were the best things about the episode.

The opinions offered are that of the writer and not of The Nerdy Girl Express and may differ from those of others. It contains spoilers so if you haven’t seen The Flash episode “Elseworlds,” please do not continue reading.

You’re Oliver Queen (Stephen Amell) and you’ve just spent several months in prison. It’s great to be able to sleep in a bed and not a regulated prison cot. You wake up and are greeted with a kiss by another man’s wife. And to make matters worst, she believes you’re her husband! The look on Oliver’s face when Iris kissed him and called him Barry was priceless. Queen immediately thought Barry (Grant Gustin) had done something.  After all, Allen is constantly messing with the Speed Force and changing history. So if Iris thought he was Barry and The Flash, people Oliver knew must believe Barry was him and The Green Arrow. Cut to:

4. Barry is The Green Arrow 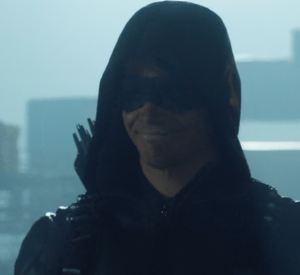 At least Oliver woke up to a kiss and breakfast from Iris. Barry found himself in the middle of a sparring session with John Diggle (David Ramsey) when he discovered he was The Green Arrow. When John tells him to suit up, Allen has one question “Do I get help putting this on?”

“You have failed this city.” Words you’d never thought you’d hear from The Flash. But when”Green Arrow Flash” Oliver Queen uttered his famous tagline, I couldn’t help but laugh. Although I enjoyed Barry in Green Arrow mode, Amell as The Flash was an absolute joy. Stephen Amell plays Oliver Queen as  brooding, something even touched on in the episode when Oliver told Barry how he had to focus on his vengeance in order to effectively do his job as Green Arrow.

The minute the opening bars of Remy Zero’s “Save Me” started when we saw the Kent Farm in Kansas where Kara (Melissa Benoist) was visiting cousin Clark (Tyler Hoechlin), it immediately brought me back to The WB/The CW’s Smallville.  Even though Tom Welling played Clark on the defunct series, I believe the choice to use Smallville’s theme was perfect in capturing the feel of Clark Kent’s farm boy life.

1. Stephen Amell and Grant Gustin playing off each other

What made the premise of Barry and Oliver assuming each other’s roles as The Flash and Green Arrow work was how well Stephen Amell and Grant Gustin play off each other. I tweeted how much I wish we got more Barry/Oliver scenes. The actors know their characters and have such an ease and comfort with each other that their scenes together offer viewers something special and the chance to see Barry and Oliver through their eyes. Here’s hoping writers of The Flash and Arrow will find more opportunities to pair up Barry and Oliver in future episodes of the two series.

What did you feel the best things about The Flash Season 4 Episode 9 “Elseworlds” were?