Roswell New Mexico is a reboot of Roswell that aired on The WB 1999-2002. It is based on the Roswell book series by Melinda Metz and premieres on The CW on Tuesday, January 15, 2019.

Official Synopsis from The CW: “When Liz Ortecho (Jeanine Mason) reluctantly returns to her tourist-trap hometown of Roswell, New Mexico she reconnects with Max Evans (Nathan Parsons), her teenage crush, who is now a Roswell police officer. But Liz soon discovers a shocking truth: Max is an alien who has kept his unearthly abilities hidden his entire life, along with those of his otherworldly sister, Isobel (Lily Cowles), and their friend Michael (Michael Vlamis). Elsewhere, Master Sergeant Jesse Manes (Trevor St. John) spearheads a long-standing government conspiracy — unbeknownst to his son, Alex Manes (Tyler Blackburn), who has recently returned from service overseas with emotional and physical injuries. The politics of fear and hatred that run rampant in Roswell threaten to expose Max and his family and could endanger his deepening romance with Liz…as well as their lives. Heather Hemmens, Michael Trevino and Karan Oberoi also star. Julie Plec directed the episode written by Carina Adly MacKenzie.”

Season 1 Episode 1 is titled “Pilot” Here is the synopsis from TV Guide: “In the premiere, Liz Ortecho reluctantly returns to her tourist-trap hometown of Roswell, N.M., and reconnects with Max Evans, her teenage crush who is now a Roswell police officer. But Liz soon discovers a shocking truth: Max is an alien.” 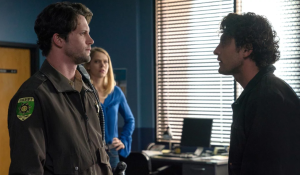 Home is where the heart is. Don't miss the series premiere tomorrow at 9/8c on The CW! #RoswellNM pic.twitter.com/4B6evrSIdK

They're far from ordinary. Don't miss the series premiere of Roswell, New Mexico Tuesday, January 15 at 9/8c on The CW. #RoswellNM pic.twitter.com/UOugkK2BM1