Often heralded as “the grandfather of historical fiction,” Jakes is the writer of The Kent Family Chronicles, The North and South Trilogy and other great works of fiction.

In The Kent Family Chronicles, readers were introduced to the Kent family through its founder Phillipe Charboneau, a Frenchman who leaves France in the 1770s and goes to America where he gets caught up in the events leading up to the American Revolution by interacting with noted historical fiction of the time Benjamin Franklin and John Adams. The Kent Family Chronicles were written for the bicentennial of The Declaration of Independence and consist of eight novels (The Bastard, The Rebels, The Seekers, The Furies, The Titans, The Warriors, The Lawless, The Americans) that sees the Kent Family through major events of the time. The first three novels had miniseries adaptations. 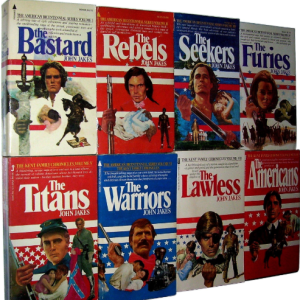 The North and South Trilogy (North and South, Love and War, Heaven and Hell) was set before, during and after The Civil War and saw the Main Family of South Carolina and the Hazard family become lifelong friends when a son from each clan attends the military academy at West Point. The saga of North and South and the story of George Hazard and Orry Main became a highly successful ABC Novel for Television miniseries in 1985 with Book One of North and South.

North and South miniseries is my favorite movie of all time

John Jakes has that rare talent as an author as he is able to successfully blend his fictional characters with real life historical fiction in works that are flawless. He is a prolific writer and one that should be studied in high schools along with other great authors.