I have been a fan of Terri Garber for thirty-four of my fifty-four years. The first time I saw Terri on the television was as Ashton Main in the unforgettable miniseries North and South. Her performance leaped off the screen and was a major reason why North and South became my favorite movie of all time.

After North and South, I made it my mission to follow Terri’s career. Fortunately, she was soon cast as Leslie in the original Dynasty. And in my opinion, an opportunity was lost. An actress of Garber’s immense talent was terribly underused as this character. To this day when I watch Terri’s old Dynasty scenes, I wonder why the writers didn’t have her doing more. 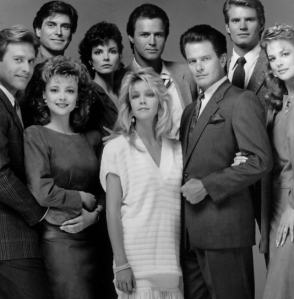 In my search for Terri Garber projects, I came across a television movie that she made before North and South called No Man’s Land starring Stella Stevens. The premise of the film finds Stevens as a female sheriff with three adult daughters from different marriages. Garber played Brianna Wilder. I’d encourage Terri Garber fans to check this movie out if you can find it on DVD (I rented it on VHS in 1986).

In addition to Dynasty, Terri made the rounds on some of the popular television prime time shows of the 1980s era like Midnight Caller, Murder She Wrote, Quantum Leap and Matlock. I was happy when she was cast on my two favorite daytime dramas the now defunct Santa Barbara and General Hospital.

One of the best things about social media is the opportunity it gives to connect with people who share similar interests. An example of this is when I discovered the North and South Facebook Group.  Through this group, I’ve had the chance to talk people who enjoy North and South as much as I do. A plus is Terri is active in this group and often comments to posts. When I like about Terri is she hasn’t let Hollywood change her from being a genuine person, which is commendable. Additionally, she is a wife, mother and daughter who deeply loves her family.

Terri does independent fill projects. Sister’s Alchemy, the company she started with her sister Lisa takes up a lot of her time. Garber has a talent for making high quality, natural ingredient soaps. I’d recommend these products.

So on your birthday Terri, my wish for you is that you continue to enjoy all life has to offer. I thank you for the numerous gifts you’ve given fans over the years with your performances.

Here is a poem by The Nerdy Girl Express poet and writer Tracy Diane Miller: