This past week’s episode of iZombie is once again one of the best of the season. Season two is really knocking it out of the park on great episodes. This time we deal with Liv on stalker brains, where she does and does not find out some very important things. Not to mention we finally get a Clive centric episode-hallelujah!

Instead of the usual start to our murder victim of the week already being at the morgue, we instead find her still very much alive. She’s attacked by a man, but gets the upper hand in the fight. Before she can finish it, she is then shot by a second, unseen assailant in the back and dies. I liked the little mix up of the usual murder plot we get, and iZombie wasn’t done with the change ups.

We find out that Clive knows the victim, knows her quite well as he used to date her. Clive’s love life has been put in full view as we found out in an earlier episode that he is dating Dale Bozzio. Now we get an ex-girlfriend, a reported wedding planner and badge bunny. It’s exciting stuff as we have been starved of Clive information since the beginning of iZombie. Clive is immediately suspected when they find the gun he owned was used in the murder. Now the weekly case becomes much more complicated as our resident detective and in on the police force is made to sit this one out.
We meet a new detective, Cavanaugh, who no one seems to like and he seems to relish in the fact they don’t. Seriously even Ravi doesn’t like him and that man is an angel. Shut up, I’m not biased…anyways the new detective really wants to take Clive down and doesn’t seem to be looking for clues elsewhere, so it’s down to our ‘psychic’ and Ravi to do the detectiving this episode.

Liv eats the victim’s brains and they all find out that the wedding planner was also a serious stalker. While Liv maintains who she is on brains, they still can deeply influence her decision making process. The rest of the episode is her fighting off the brains and only sometimes winning. Ravi is gold in this episode, which was also nice to see as he is sometimes pushed to the background to make room for Liv/Major/Blaine dramas. He makes a comment of, “What if you have a vision of you doing Clive and you see his O face?” he then proceeds to make faces that he thinks it will look like.
Bozzio makes an appearance helping Liv and Ravi out by showing them a scrapbook that the wedding planner had made. Most of the photos are faked, but they do find out that Clive is a huge Game of Thrones fan, cooks Cajun food and plays the piano. Ravi immediately sets out to tease Clive about these new found details with Liv right behind him. Later they tease him more when he brings them po’boys to eat and says they’re takeout. They now know that Clive likes to make them food and tease him mercilessly over it until he admits to it. It was super cute.

The duo goes and sees another couple and poses as if they are engaged. They hold hands and everything; it was every Ravioli shippers dream. I’ve decided they can never be a couple on the show for the sole reason it would be too adorable. Ravi does a hilarious stretching routine before and promptly tells them his name is ‘Shawarma.’ Liv has a vision when they see the man of the couple is also a cop-seems our wedding planner had an affair with him too and Liv sees him throw his scrapbook off a bridge. Liv and Ravi go looking for it and Ravi is successful in finding it in more or less one piece. 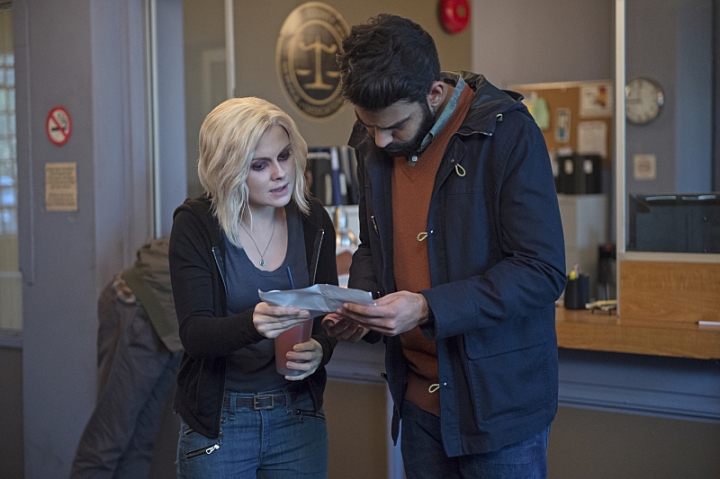 Liv succumbs some more to the stalker brain and is not only going through Major’s facebook, but also asks him about the girl shampoo she finds in his bathroom. It ends up being Ravi’s and Liv even admits it does smell like him. Major makes a big deal of the fact Liv is doing this and she tells him she’s trying to fight the brains. He seems nonplussed at best. From this reaction and also to his reaction to her on the dark magician brains, I wish Major could learn to deal with Liv’s mood swings better. No one else seems to have a problem doing that, not even Clive who has zero clue about her being a zombie still. It is likely less to do with the mood changes and more to do with the fact Major has yet to deal with Liv being a zombie. His night job doesn’t help in that respect. Still for a man that proclaims his love, you would think he would try harder.

We also get some short scenes showing that Vaughn is trying out Super Max and it obviously still has some major angry side effects. I wonder how this will change up how he reacts to things in the future? Like say if he finds out about that freezer Major is keeping.

In another new twist to the show, Liv goes full on stalker and breaks into another cops vehicle where she thinks she can find some clues. She is right on the mark and finds he too has a scrapbook full of the wedding planner’s delusions. She is able to steal one of the pages before he catches her and throws her butt in jail. I really loved Liv being in jail because it showcased something that I and I’m sure many others sometimes forget. That brains are hard to come by for most zombies. This was touched upon last season when Ravi reminded Liv that it was easy for her to be angry at Lowell for buying brains from Blaine when she could get them whenever she wanted and he couldn’t. Liv becomes very hungry and even goes a little full on zombie in a cell full of regular women, luckily for them they are all asleep and don’t see it and Ravi is able to get her out in the nick of time. 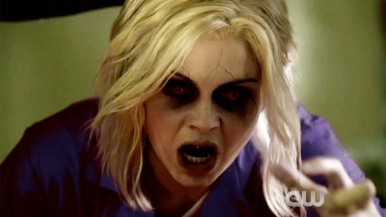 Poor Liv is forced to eat more stalker brains (which Ravi thoughtfully brought with him) as it’s all they have on hand. She still has the scrapbook page she stole from the other cop and it shows the original photos that were of him and a certain unique ring that Liv had noticed on the woman of the couple her and Ravi had visited before. She goes and confronts them and finds the woman’s brother also there. We recognize him as the man who was fighting with the wedding planner at the start of the episode and he runs for it. He makes it to his van but is thwarted by Cavanaugh and Karma Chameleon plays. It was great. The woman also admits to being the unseen shooter and stealing the ring off of the dead wedding planner’s hand.

We end the episode with Liv trying to get into the safe Major keeps in his closet. We see he does have some shady stuff in there before, but he has since removed it. In fact when he finally opens it for Liv all that’s in there is her old engagement ring. He says he couldn’t sell it or stand the thought of someone else wearing it. Plus he always hoped Liv would change her mind. It was a very sweet scene, but it was soured some by the fact this is another chance for Major to come clean about what he’s doing and how much danger Liv is in and he doesn’t.

Next they are sleeping in bed together, but Liv still has some stalker in her and she can’t help but check his phone when she hears it buzz. It’s Rita although Liv still has no clue it’s her. Rita has no clue that it’s Liv either. Rita is just trying to mess with Major trying to get him to come over and see her for some ‘fun’ and even sends a sext of herself, albeit still not showing her face. Liv is left looking stricken at the fact this relationship wasn’t as over as Major made it out to be. 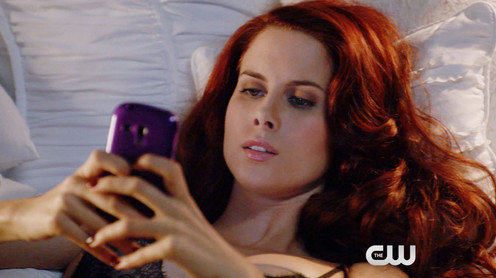 While Liv is being very bad not only looking through Major’s phone but impersonating him, Major also has blame in the fact he’s allowed this to go on. When the fact of his night job eventually comes out and that he’s kept Liv in the dark about how much danger she’s in, I don’t know if she will be able to forgive him for it all.

This was a really great episode and next week’s should be even better. It is the midseason finale (iZombie will go on a short holiday break afterwards) and it involves Liv being a superhero? Yup it looks like a superhero. Here is a still from the upcoming episode.

Make sure to read the rest of our articles on here and give us a follow @thenerdygirlexp on twitter. I’m also on there @quietlikeastorm. We cover a variety of shows and love to chat and live tweet, so don’t miss out! iZombie will return on December 8th at 9pm on the CW.