The movie Visions starts with a bang and just gets crazier from there. After a creepy title sequence full of green and black spider webesque lighting and flashes of fetal photographs we get dropped into the scene of a violent car accident.

Isla Fisher, most notably from Confessions of a Shopaholic, plays Eveleigh Maddox who one night is part of a car accident involving a family with a child. While Eveleigh lives after the accident she has to be medicated to deal with the stress, but when she becomes pregnant she refuses to take any more of the pills. She and her husband have just moved to a recently vacated vineyard to start a new life, but while the surroundings are beautiful Eveleigh is plagued by horrifying visions of a person in a black hood, moving mannequins, and random events.

During a party a woman, who it turns out is able to commune with spirits, has an episode and after calling the previous owners, Eveleigh asks this woman to help her determine what is happening in her new home. They learn that something horrible happened there and that our heroine isn’t crazy, but plagued by spirits. Our medium though insists that everything is not as it appears and tries to warn Eveleigh that she is more connected to the visions than she initially thought. There was a bit of a twist and way more gunfire than I expected near the end, but I was pleased that I didn’t entirely guess what the visions Eveleigh were having meant. 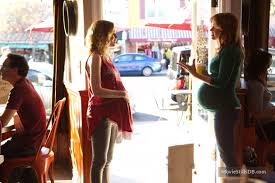 There are a lot of jump scares and some of them freaked me out a lot, mostly because when I get startled I almost give myself whiplash. It makes horror movie watching a bit dangerous sometimes. Now one weird complaint I have about the movie is that all the phones in it were on vibrate instead of ring and I literally kept thinking my phone was going off, which was only slightly stressful since I get called by work a lot and I almost never have my phone’s ringer on. That might have been scarier than the jump scares. Oh and some fun casting appearances included Jim Parsons, Sheldon from the Big Bang Theory as Eveleigh’s obstetrician, and Eva Longoria as a friend of Eveleigh’s.

Overall I’d say I enjoyed the movie more than I was expecting so I’m giving it about a six out of ten. Think you are going to check out this movie? If you do share your thoughts in the comments below or with us on Twitter, @thenerdygirlexp. You can also tweet at me, @kleffnotes, and find me on my blog, kleffnotes.wordpress.com, and on my kleffnotes YouTube channel.