Scream was back on MTV last night and it started off with some serious murder business. Well, some viral murder business in a wonderful homage to Scream 2 and Scream 4. We see a young girl alone in her house looking for her cat when suddenly the masked killer appears behind her. But wait, it’s not as straightforward as a regular murder.

It turns out the killer is actually the girl’s friend who has decided to kill her for slut shaming. Then bam, we find out this is a movie being shown at the theater Audrey works at. As she watches from the back her phone starts buzzing and she’s getting some really creepy texts. Noah then texts her and insists that even though he seems like the likely source that it wasn’t him. As she’s closing up the theater Audrey bumps into a girl that she didn’t know was still there. The two take a selfie and a hooded figure appears. As they make their way toward the back exit, there’s someone in a Brandon James mask holding a knife. Audrey’s keys have mysteriously gone missing and she scrambles to find them, but before she can the girl she’s been talking to is attacked. In a fit of panic Audrey smashes her way into a display case for a weapon. She stabs the attacker only to discover that this was a prank. A new viral video of Audrey is now all the rage. The two pranksters aren’t charged and neither is Audrey, the new sheriff points out that they were committing assault and that they should be glad they are getting off. Noah reveals to Audrey that someone was egging people on to attack her and he adds this to his very impressive murder board. 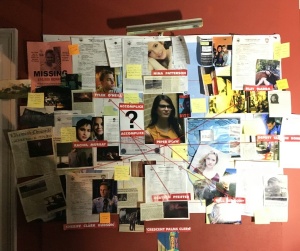 Emma is headed back to Lakewood and the other members of the Lakewood 6 are throwing her a welcome home party at Kieran’s. Emma has lied to her mom about where she is so that she and Kieran can have a sleepover. As Audrey is leaving she gets a call from the killer and she is definitely in trouble. Someone really wants her to pay for being friends with Piper. While Emma is trying to sleep she has a flashback nightmare about a farm and a dead pig. It’s very Hannibalesque. When she wakes up Kieran isn’t there and she later finds him curled up on the couch. Brooke and Jake have been having their own alone time in the school swimming pool. The two of them have a fight and wind up breaking up. Jake decides he wants to prove he’s worth Brooke and while he’s in a construction area he gets attacked. The next time we see him he’s trapped in a barn within a bear trap. Emma also makes her first appearance on Noah’s podcast during this episode, the other member of the Lakewood 6 have already been on it.

At school Emma is trying to get back to normal, but everyone is still a bit worried about her. In their psychology class we meet a ton of new characters. Brooke and Emma talk about boys and their relationships being messed up. We get to meet the new psychology teacher, who Noah apparently has a bit of a crush on. They start talking about dreams and Freddy Krueger. I’m looking forward to seeing more of the new members of the Scream Team. Jake is in serious trouble in the barn and even though he busts his way out of the trap, he can’t escape. Emma wants to investigate the barn she saw in her flashback, she’s been afraid of it ever since she was a kid. She and Brooke go together and while they enter the barn first they don’t find Jake there. They would have been too late anyway, the killer has him hung upside down and slices him open with a scythe. Emma and Brooke decide to go check out the house nearby. With all of this going on Audrey is at the movie theater and she starts getting calls and texts from the killer. It turns out that whoever they are has all the letters that she wrote to Piper. At the farmhouse Emma finds a board dedicated to her and suddenly something happens and she screams.

This season was off to a super quick start and I am excited to see what is going to happen. I’m really looking forward to watching the mystery unravel. The after show, Scream After Dark, was also absolutely amazing! It was funny and surprisingly upbeat. I had a great time watching. Share your Scream thoughts with us in the comments or on Twitter, @thenerdygirlexp. You can also find me on Twitter, @kleffnotes, on my blog, kleffnotes.wordpress.com, my kleffnotes YouTube channel, I run The Nerdy Girl Express Snapchat, thenerdygirlexp, and post recipes on the iZombie Support Group site.