On March 23, 1987, a new daytime drama focusing on the fashion industry premieres on CBS.  It was called The Bold and The Beautiful.

The Bold and the Beautiful was created by the late William J. Bell and his wife Lee Phillip Bell, the powerhouses behind the daytime drama The Young and the Restless.  The soap was set in Los Angeles and centered around the Forrester family, who ran the successful fashion house Forester Creations. Eric Forrester was a designer who married the wealthy Stephanie Douglas and together, they created the fashion empire. Their children Ridge, Thorne, Kristin and Felicia all worked at the design house. 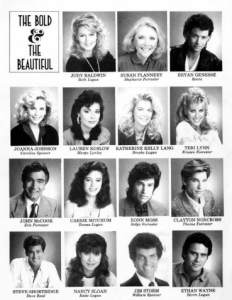 In the valley lived the middle class Logan family.  Eric had dated Beth Logan in college but ended up marrying Stephanie when she announced she was pregnant.  Beth’s husband Stephen Logan ran out on the family many years earlier.  Beth was a caterer and the mother of four children: Storm, Brooke, Donna and Katie.  Brooke dreamed of meeting her wealthy prince some day and had that dream come true when she helped her mother cater a party at the Forrester estate and met Ridge Forrester.   Although Ridge was involved with Caroline Spencer, the daughter of publishing mogul William, he and Brooke caught each other’s eye and began a decades long, turbulent on-again, off-again romance that found them married to other people but always seeming to find their way back to each other.

Another family, the Spectras, entered the canvas and compete dagainst Forrester Creations to be head of the fashion world. Sally Spectra had vision but was considered the “knock off queen” as she offered cheaper versions of high couture designs; often stealing from the Forresters themselves.  Her daughter Macy fell in love with Thorne Forrester, causing numerous complications.

As the years progressed, the Forresters, Logans, Spencers and Spectras stayed intertwined in each other’s lives.  And recently, the Spectra family returned with the grandniece of Sally Spectra (also named Sally) picking up her grandmother’s mantle. 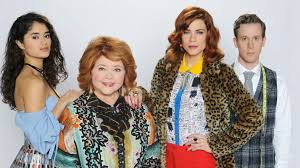 The Bold and the Beautiful is the only surviving daytime drama remaining from the others (Santa Barbara, Sunset Beach, Passions, Loving etc.) created in the 1980s-90s. It has won many Daytime Emmy Awards and is popular internationally as it is in the United States.