General Hospital’s Sam Morgan (Kelly Monaco) will have a big decision to make.

When Steve Burton returned to General Hospital on September 19, there was speculation on who he’d be playing, since Billy Miller had assumed the role of Jason Morgan in 2014.  With Miller as Jason, it was explained that Jason required extensive reconstructive facial surgery after being seriously injured in a car accident. So where would that leave Burton? Would fans accept him as anyone else but Jason?  And what about Miller? He had developed a legion of fans from playing Jason. These fans also loved his pairing with Monaco’s Sam. 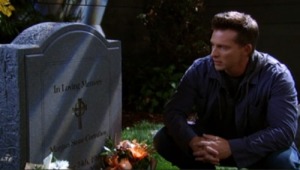 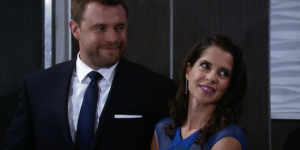 Ironically, Ava Jerome (Maura West) was the person who would play a part in reuniting Jason a.k.a Patient 6 with those he loves in Port Charles. While in Russia for her own facial reconstruction surgery, Ava met the mysterious Patient 6 and became intrigued with him. Everyone at the clinic stressed how dangerous this man was and the doctors had been keeping him drugged.  But there was something about this Patient 6 that made Ava compelled to help him; even when she was warned against associating with him.  The warnings became a threat:  If she helped Patient 6, the doctors refused to perform her surgery.  Ava Jerome doesn’t take to threats.  She persisted and was instrumental in Jason making his escape from “Dangerous Hospital.” 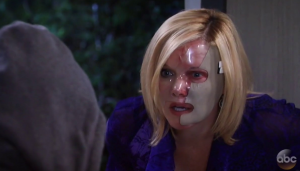 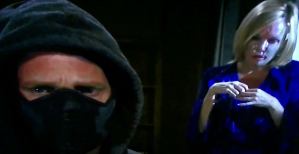 Jason’s arrival in Port Charles was filled with surprises for him. He learned Morgan was dead and saw a little boy with Elizabeth in the park who she referred to as Cam’s brother. Could this be his (Jason) dead son Jake?  But perhaps the biggest shocker was that Sam was married to another man and everyone believed this man to be Jason Morgan!  Again with Ava’s help, Jason arranged a meeting with Sonny.  But their chance to reconnect was met with interruption with the appearance of faux Jason and a gun toting man after Morgan. However, the long awaited Jason/Sonny reunion took place at one of Corinthos’ safe houses. 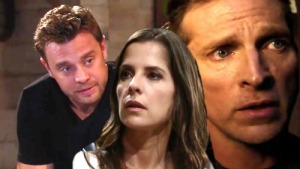 After initially being doubtful, Sonny finally accepted Patient 6 as his Jason.  But the men after Jason will target the media party at The Metro Court, putting Sam and everyone Jason loves in danger.

What will Sam do when she see the face of the man she loves? Will she choose old Jason or stay with the man she believes to be Jason?

Photos Courtesy of Official General Hospital Twitter and taken from internet. All credit given to original sources.